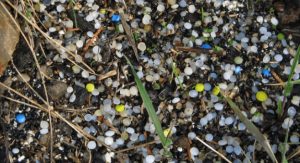 Environmental authorities in France are livid over a wave of plastic nurdles washing up on the pristine shores of Brittany, where the tiny white pellets have become known as the “white tide” or “mermaid’s tears.” The source vessel is unknown, but local and national officials have asked prosecutors to find and charge the anonymous perpetrator.

Nurdle pollution can interfere with tourism and fishing, and it has been linked to deformities in marine life. The problem is widespread, but it gained attention after the sinking of the feeder X-Press Pearl off the coast of Sri Lanka in 2021. That accident released nearly 1,700 tonnes of white plastic pellets – raw ingredients for the manufacturing of plastic goods – which washed up in drifts along the island’s western shores. It was by far the largest spill of its kind in history, and the long-term damage to marine life, fisheries and tourism will likely cost Sri Lanka billions of dollars. More here.

not extreme but pretty damn nice

the british are coming