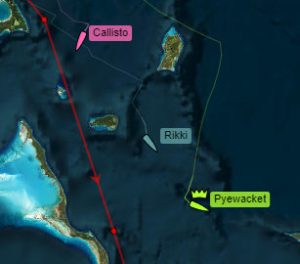 What happens when only three boats want to go on a distance race?  Well, it’s happening as we speak as a grand total of three (3) boats are sailing in the 811-mile Miami to Montego bay Pineapple Cup.

Why even bother? Sure the boatload of pros on Pyewacket want to set an elapsed time record, but at a current speed of 6.4 knots and 211 miles traveled over the last 24 hours, that ain’t happening.  Oh well, the checks will just be bigger for those fat daily rates, eh boys?

The race website is equally lame too. For example, clicking on the results tab from the home page takes you to the 2011 to 2019 results, where in ’09, twelve boats made the trek. Granted, this is never really a well-attended race, but three boats? And all miles apart in speed (and distance when it is all said and done).

The show must go on, one reckons, but the future of this race looks as glum as Pyewacket’s record prospects.

going to carlolina in my mind