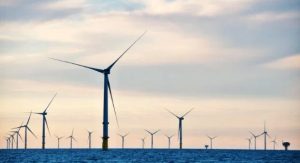 Further demonstrating the strong demand emerging in the offshore wind energy sector for prime locations, the UK’s Crown Estate concluded agreements for leases on six new offshore wind sites as part of the country’s fourth round of leasing. The annual option fees set by the companies through the auction process stand to provide £1 billion ($1.24 billion) annually to the UK Treasury setting a new record following similar records in the U.S. from 2022’s auction for the leases in the New York Bight.

The Crown Estate, which manages all the UK’s offshore property, decided to launch the auction process in August 2022. Three of the six projects offered are located off North Wales, and the Cumbria and Lancashire coast, while the other three are located in the North Sea. The Crown Estate estimates the locations could provide a further 8 GW of power generation bringing the total rights awarded by The Crown Estate to 41GW of offshore generation capability. Read on.