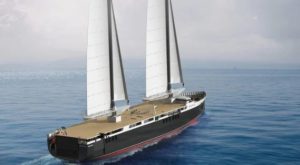 The construction contract for the world’s first, large wind-powered modern commercial cargo ship has gone effective marking a key milestone in a project launched more than a decade ago. With the completion of financing, including investments from the CMA CGM Fund of Energies and Corsica Ferries, Neoline Armateur and RMK Marine shipbuilding of Turkey reported the contract went into force on January 6, 2023, and calls for the delivery of the Neoliner in 2025.

“Here we are, the first Neloner will come to life,” said Jean Zanuttini, CEO of Neoline calling it the first achievement of a more than 10-year project. “Together, we have succeeded in carrying out a project which, in many respects, could initially seem utopian. This is an unprecedented opportunity to do our part in the energy transition and to pick up the thread of history of maritime transport under sail.”

The 446-foot long Neoliner is a Ro-Ro cargo vessel that will primarily be propelled by two 250-foot high solid sails that provide over 32,000 square feet of sail area. It will be the first installation of the SolidSail rigging system created by Chantiers de l’Atlantique. The French shipyard will develop the sail system for the vessel which consists of carbon fiber masts and a unique base that both permits the sails to rotate and to till to increase the vessel’s clearance. The sails are expected to reduce emissions from operation by 80 to 90 percent versus conventional vessels. Read on.