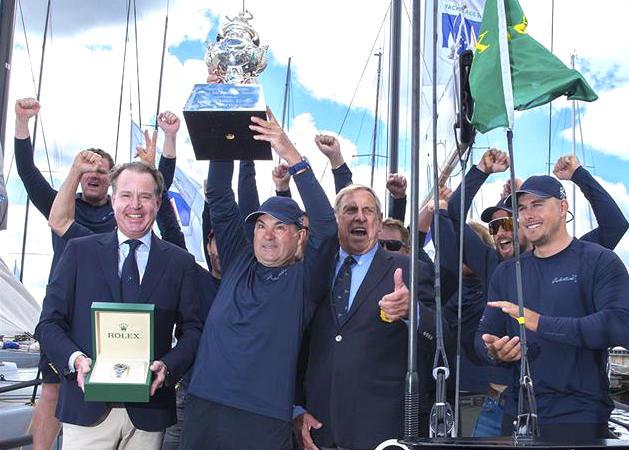 A dramatic development in the Celestial rating saga has been prompted from an entirely unexpected source 11,000 miles away from the TP52 group in Sydney. Russell Beale, a former Royal Yachting Association National Judge in the UK, has written directly to the RORC. His email of January 17 was short and to the point:

I have been following the Sydney-Hobart race and its results with interest. I would like to request a rating review for the TP52 Celestial (owner: S. Haynes).

The effect of those two sentences was like lighting the fuse of a rocket flare. The RORC responded the following day, asking Beale to explain his “valid interest” in Celestial’s rating and quoting the applicable IRC Rule 9.2. It states:

9.2 Anyone who has a valid interest in a boat’s certificate may also request a rating review from the Rating Authority, by submitting a review request through their Rule Authority to the Rating Authority. A fee may apply. The owner of the boat subject to review will be requested to file a reply as soon as possible.

Undeterred, Beale wrote back the same day. He noted that there is no definition of “valid interest” in the IRC Rules and offered the dictionary definition of “well-grounded or justifiable: being at once relevant and meaningful”. Beale then got to the real substance of his request:

There is clearly a contentious issue here relating to the sudden change in the IRC rating relating to just prior to the Sydney-Hobart race, and, as many of the parties involved will know each other there may be a reluctance to request a review. But for the integrity of the sport, it is important that ratings are seen to be correct and open to challenge.

The sense of that position is difficult to fault. By making his request directly to the RORC Beale was effectively relieving everyone at the Down Under ‘end’ of this dispute from any obligation to act. The other TP52 owners, the Cruising Yacht Club and Australian Sailing could all sit on their hands and await an independent review.

But the RORC is not inclined to take responsibility. Yesterday they responded in these terms, revealing that their rating office had made some inquiries of their own:

We have undertaken a careful review of the boat and the measurement data in conjunction with the CYCA and Australian Sailing. As you may understand these boats are already under careful scrutiny and assessment due to their high profile and regular rating changes.

As you are not an owner, fellow competitor, race organizer, designer, etc. we are not in a position to process your request further in accordance with IRC Rule 9.2. If you need further information then please contact Australian Sailing and if they feel necessary they may request a further rating review…

“I’m a bit disappointed in the response, as I think I meet the definition of  an interested party.  I will contact Australian Sailing, as suggested, but I would have hoped that maintaining the veracity, repeatability, and reliability of the IRC system would be a priority.”

What happens next? Stay tuned. Meanwhile, Australian Sailing has now agreed to facilitate the request to re-measure the S&S34 Crux. An interesting precedent has been set. What say you?

looking good, right up until they weren’t

it just goes and goes and…