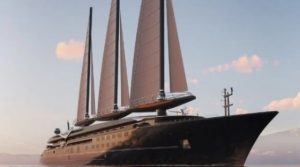 French hospitality company Accor Group is the latest hotel company to announce plans to enter the cruise business. Accor signed a letter of intent with Chanteirs de l’Atlantique for the construction of two of the world’s largest sailing ships which it intends to use as cruise ships for its Orient Express luxury brand.

The shipyard expects the order for the ships, which will be bank financed along with an investor syndicate, will be signed within a few weeks. Accor will hold a minority stake in the project.

The concept is for a luxury hybrid-powered cruise ship combining the shipyard’s SolidSail concept along with a dual-fuel engine that will run on liquified natural gas and be capable of converting to green hydrogen in the future. The sails in the right conditions will be able to propel the ship while according to the company, they will overall “contribute significantly to the hybrid propulsion of the ship. More here.