welcome (back) to the jungle 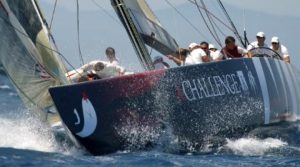 K-Challenge is back in The America’s Cup after more than a few years.

Headed up by Stefan Kandler and Bruno Dubois, it has just been announced that after quite a hiatus the team that last appeared in Valencia in America’s Cup 32 is returning to the fray.

It has been in the offing for quite some time and K-Challenge, challenging under the burgee of the Société Nautique de Saint-Tropez joins the existing challengers from Great Britain, Switzerland, Italy & the United States.

Perhaps the move of the Cup from New Zealand to Spain was an influence but no matter, the French are in.

A strong pair head the team with Bruno having a long history of managing sailing teams , most notably as Team Director of Dongfeng’s dramatic Volvo Ocean Race win in 2017-18 and more recently  the improving France SailGP squad.

It is noticeable that, now, two European challengers have come out of the woodwork since the move of the event to Barcelona.

More news as it becomes available