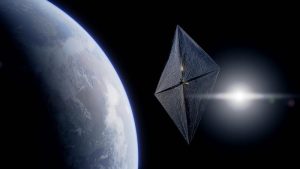 But it is sailing!

Ocean carrier CMA CGM sails to six continents and dozens of islands, but its latest project will take its reach even further. The French shipping company has co-sponsored the first test launch of a French solar sail-powered spacecraft, Gama Alpha, which successfully entered orbit aboard a SpaceX Falcon 9 rocket on Tuesday morning.

A solar sail allows a spacecraft to accelerate using sunlight for propulsion. In the vacuum of outer space, the faint pressure produced by photons bouncing off the reflective foil sail is enough to drive the craft forward. In the absence of anything to slow it down, the acceleration is additive, and solar sailcraft are theoretically capable of attaining 80% of the speed of light over long time scales.

To navigate, a positioning system for the sail can be used to change the spacecraft’s trajectory, and it can even be used to tack “upwind” towards the sun, according to French aerospace startup Gama.  Read on.

phil’s fun Philippe Kahn sends in this video of him sailing his D-One. Think he likes it? “These single handed skiffs are just perfect boats. I’m so in love with it that it’s hard to get me on anything else!”