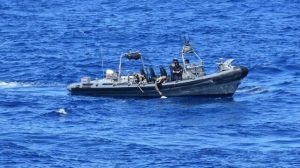 Last week, the crew of the Royal Dutch Navy patrol vessel HNLMS Holland lucked out with a particularly easy drug bust. No pursuits, warning shots or boardings were required: all they had to do was pull 5,000 kilos of cocaine out of the water.

A Dutch Caribbean Coast Guard (DCCG) patrol aircraft spotted a floating field of bales in international waters of the Caribbean, and the Holland diverted to the scene to investigate, along with a U.S. Coast Guard helicopter. The Holland dispatched her small interceptor boat, and the crew discovered that they had stumbled upon a vast cargo of cocaine, afloat on the high seas and waiting for pickup.

No suspects were present, so there were no arrests to make. The drugs were hauled aboard and passed off to the U.S. Coast Guard for destruction. Read on.