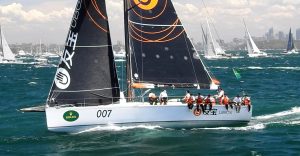 This Cabbage Tree island Race lasted 24 hours, was in light primarily reaching conditions, and covered 172Nm AND goes nowhere near the Bass Strait. In other words, less than one-third of the race distance of the Sydney Hobart which is over 600 Nautical Miles long and a much greater difference than the ‘tiredness’ or lack thereof of the smaller shorthanded boats is that the Sydney Hobart is highly unlikely to have the same weather conditions (relatively light reaching) for the 600 miles and the three days or more it takes to complete the race.

His comment about the “purportedly-dominant TP52s is, I suspect, a lucky guess rather than any actual factual knowledge. Facts actually state that boats of the size of TP 52s historically do rather well in the (usually) blast down Australia’s East Coast.

Some years ago – 2016 actually – a Chinese sailing friend told me he wanted to do the Sydney Hobart, how should he go about it. I told him that the first thing he needed was a boat. Find me one he said.

I did some proper research. First thing was to look at the average length of the winners over the previous 20 years – not just one race 1/3 of the length. The average was 49.8 feet. The two boats that were closest to that were the Cookson 50 and TP52s.

We found Pretty Fly 3, paid the deposit, had her surveyed, added a couple of headsails and a North 3Di Raw main, and had the graphics done – all in a rush. The crew was 2/3 the owners own Chinese crew and 1/3 some of the Dongfeng guys with Charles Caudrelier as skipper. Hardly a long-term project but just shows if you start with the right foundation – in this case a boat of a competitive size

UBOX as she was now named finished 3rd Overall IRC and 1st Overall ORCi – RESULT! The party(ies) that ensued in Hobart starting on Constitution Dock with my wife, myself, and the owner Wang Bin in a group hug jumping up and down with tears and shouts of joy were something to remember. As Ellen MacArthur once said “It was quite a moment” only surpassed, in my experience, by what followed when Dongfeng crossed the line off The Hague two years later.

Perhaps if Boy David actually took part in some of these events he might understand that the recent race results are highly unlikely to cause a TP52 owner any need for David’s “unexpected reality check”. The ACTUAL REALITY is that until early 2023, probably around the New Year nobody will know the reality of who lifts the 2022 Sydney Hobart Tattersall Cup. It might indeed be a 35-footer but the odds are it will be something around 49.8 feet.