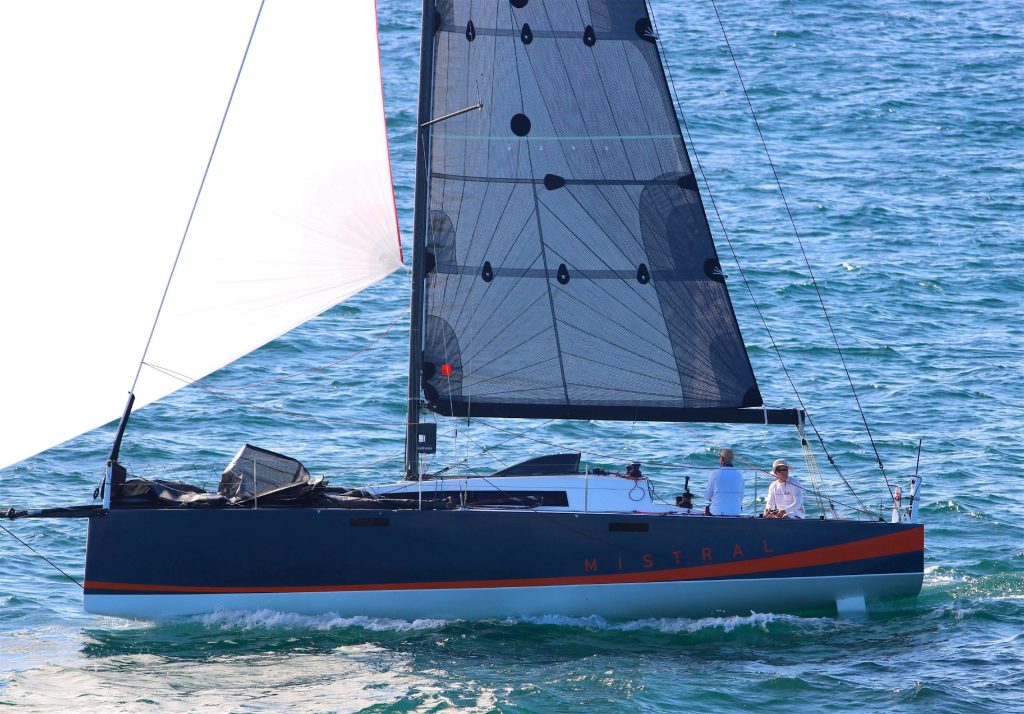 Last weekend’s 172nm Cabbage Tree Island race – the traditional offshore warm-up for the Sydney-Hobart – was a triumph for the new Two-Handed division and gave the purportedly-dominant TP52 brigade an unexpected reality check.

The top three places on IRC were all claimed by small, two-handed boats – a podium clean sweep. The winner was Mistral (above), a Lombard 34. Six of the top ten on handicap came from the growing short-handed ranks. The most successful marques were the J99 and Jenneau Sunfast 3300.

Meanwhile, the best-placed TP, Gweilo, finished in 13th place on IRC and Celestial, runner-up to Ichi Ban in last year’s Sydney-Hobart, was way down in 52nd.

What happened? It appears that conditions for the up-and-back race were close to perfect for the smaller, lighter boats. They rate well against the 50-footers and enjoyed the moderate reaching conditions.

Another likely factor was that the average elapsed time – around 24 hours – was short enough to ensure the two-handed crews would not have to cope with the inevitable effects of exhaustion they face in longer events.

This remarkable set of results has breathed fresh life into the debate about whether the two-handers are competing on a fair basis against conventionally crewed yachts.  The authorities in Australia ruled that two-handers can use unlimited autopilot while the conventional entrants cannot, and must carry a minimum of five crew.

Perhaps the conditions last weekend created a rare “sweet spot” for the two-handers. But owners of TP52s will doubtless be concerned that 22 of these swift little yachts are entered for the Sydney-Hobart race that starts on Boxing Day.

Meanwhile, for those interested in the supermaxi line honours battle, the finishing order for Cabbage Tree was andooComanche, LawConnect, Black Jack and Wild Oats XI.

Title thanks to Urban Dictionary – ed.