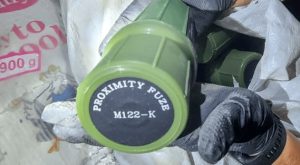 The U.S. Navy announced on Saturday that naval forces in the Middle East had intercepted a fishing trawler smuggling more than 50 tons of ammunition rounds, fuses, and propellants for rockets in the Gulf of Oman along a maritime route from Iran to Yemen. Forces operating from the expeditionary sea base USS Lewis B. Puller carried out the interdiction, marking U.S. 5th Fleet’s second weapons seizure in a month.

Forces from Lewis B. Puller found more than one million rounds of 7.62mm ammunition; 25,000 rounds of 12.7mm ammunition; nearly 7,000 proximity fuses for rockets; and over 2,100 kilos of propellant used to launch rocket-propelled grenades. Read on.