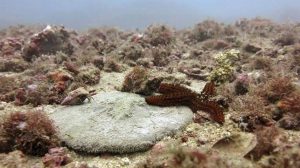 You might not have heard of the Blue Amazon, but it’s the part of the ocean owned by Brazil. Otherwise known as Brazil’s exclusive economic zone (EEZ), it covers an area of 3.6 million square kilometers, equivalent to half of the Amazon rainforest.

Much like the Amazon itself, it is abundant in natural and mineral wealth, and this has aroused great interest in Brazil, given the country’s special rights to such resources within its EEZ.

Beyond the EEZ, there is also ever-intensifying attention – and ongoing negotiations – on deep-sea mining in international waters. Brazil wants to expand its jurisdiction to explore for and potentially exploit minerals beyond the confines of its Atlantic coastline. But experts warn that, given the lack of studies and specific legislation currently in place, such activities could cause serious damage to the ocean environment. More.

creep of the week