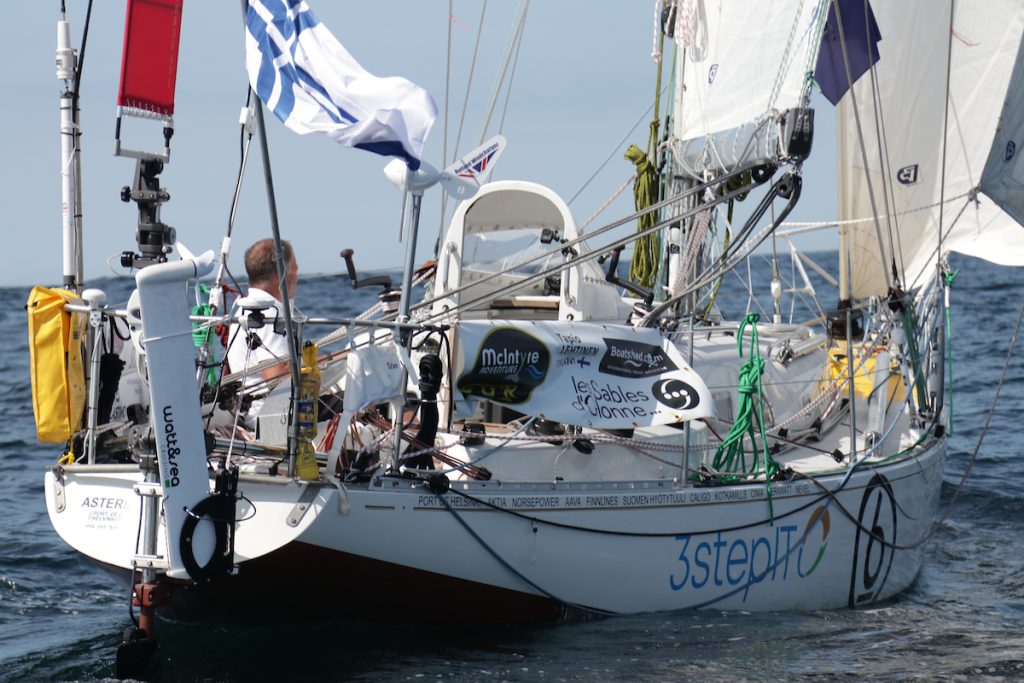 There is a certain understanding among mariners of all stripes, no matter creed, culture, country, or religion. If there is a fellow mariner in distress you stop where you are going, divert to where you are needed, and lend assistance. This unspoken credo has saved many lives over the years and, thankfully, it saved the life of one of the competitors competing in the Golden Globe Race.

The GGR is a solo, non-stop circumnavigation in retro boats retracing the route (and spirit) of the original Golden Globe race that took place in 1968. This past Friday the Finnish sailor Tapio Lehtinen activated his EPIRB. He was among the leaders when on a perfect summer sailing day (his words) in the Southern Ocean, his boat hit something and within five minutes the water was up to deck level and twenty minutes later it had sunk. Tapio was able to inflate his liferaft, grab his emergency grab bag and watch his beloved yacht slip slowly beneath the waves; every sailor’s nightmare.

The pre-race preparations for the Golden Globe Race are rigorous and the boats are well prepared. Tapio was lucky, if you can call it that. Two other competitors and a Hong Kong-flagged bulk carrier, the Darya Gayatri were in the vicinity. In a coordinated effort between the GGR Crisis Management team in France along with Race Founder Don McIntyre who was in Cape Town at the time, and with support from the Maritime Rescue Coordination Center, also in Cape Town and CROSS Griz-Nez in France, they managed to rescue Tapio.

First they diverted South African sailor Kirsten Neuschafer and Indian sailor Abhilash Tomy while at the same time communicating with the captain of the Darya Gayatri. A kite more than 24 hours after his boat sank, Kristen hauled Tapio on board. They shared some rum and not long thereafter they rendezvoused with the Darya Gayatr. The captain maneuvered his ship to create a wind block and Tapio climbed back into his raft after being tossed a line from the ship. They hauled him alongside and then hauled him on deck. They also salvaged his liferaft. Tapio left his survival suit as a gift to Kristen as she did not have one. Within a short time the  Darya Gayatr was heading for Rizhao in China, and Kirsten resumed her course through the Southern Ocean.

Less than two weeks ago, while racing his trimaran in the Route du Rhum, a race from France to Guadeloupe, French skipper Thibaut Vauchel-Camus was rescued when his boat capsized. On the same day another French sailor Brieuc Maisonneuve was rescued by sailing legend Jean-Pierre Dick after his catamaran capsized. Maisonneuve was dropped off in the Azores Islands and Dick continued on racing.

There have been numerous dramatic rescues and we can thank GPS satellite tracking and EPIRB’s for helping save many lives. Imagine what would have happened if Tapio had been racing the original Golden Globe Race. He would have disappeared without a trace. I guess the takeaway is this; the more yachts and ships out there, the better chance you have of being rescued. The flip side is with all of those boats crisscrossing the oceans there is more crap out there floating around just waiting to be hit.

Tapio says that he had no idea what happened, but one can only presume that he hit something and that ended his circumnavigation, but he lives on to sail another day, figuratively and literally. Next year he will be competing in the 2023 Ocean Globe Race, a retro Whitbread Race which will mark the 50th anniversary of the original 1973 Whitbread-Round-the-World race.

Kirsten Neuschafer will be compensated for lost time. – Brian Hancock.