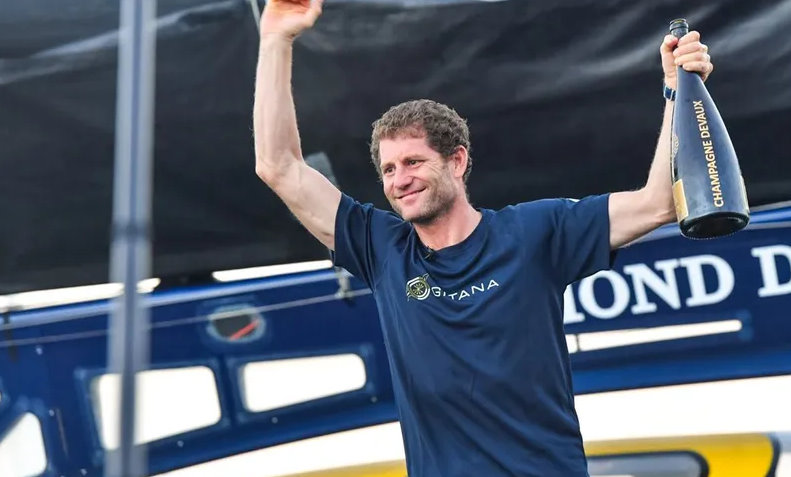 There are those that will say he had a fast boat but although a designer can design a fast boat, the sailor still has to point it in the right direction. The fact that the boat performs at such a level so consistently is surely down to the meticulous preparation of Caudrellier and Cammas and their shore team with a number of modifications being made prior to this edition of the Route Du Rhum to better mode her for single handing.

Charles Caudrelier’s victory in the Route Du Rhum is no real surprise to those who know him and his history. A winner in the Solitaire du Figaro back in 2004 and twice a winner of the Transat Jacques Vabre having come second in 2007 with Marc Guillemot elevated to first in the IMOCAs with the same co-skipper in 2009. He followed this in 2013 with the second win, this time co-skippering with Sebastien Josse, this time on a MOD70.

To the best of my knowledge, he is one of the winningest sailors (if not THE winningest) in the Volvo Ocean Race winning as watch captain with Franck Cammas on Groupama (2011-2012) a, a team that on the Southern Ocean leg showed remarkable seamanship in that having dismasted they managed to get the mast back in the air and finished the leg ultimately leading to an overall win.

Three years later (2014-2015) it must have been somewhat of a déjà vu moment when Dongfeng lost around the top 1/3 of their rig 250 miles short of Cape Horn yet still managed to make it to the next stopover in Itajai. The team finished that edition 3rd overall.

Perhaps a glutton for punishment, he was skipper once again of Dongfeng in 2017-18 winning an exciting battle on the last leg by making the bold decision (actually decided before leaving Gothenburg) of hugging the coast to score a popular and emotional victory at Den Haag.

Two wins out of three races (all podiums) is not a record to be sniffed at.

This edition of the Route Du Rhum has not exactly been blessed with the usually strong trade winds that would have suited Gitana 1’s foiling ability perfectly yet Caudrelier still managed to set a new course record of 6 days; 19 hours; 47m; and 25 seconds, the first time the course has been sailed in under a week and almost half a day quicker than the previous best.

Typical of the self-effacing, almost shy Caudrelier his comments after the finish said about his victory “This if for the family Rothschild. He went on to say “It’s for Franck Cammas, as he had the experience. Without him I wouldn’t be here” finally “Thanks to everyone for believing in me”

Well done Charles, you also have said “I just drive in the race” but what a drive! – Shanghai Sailor.

the boot gets the boot