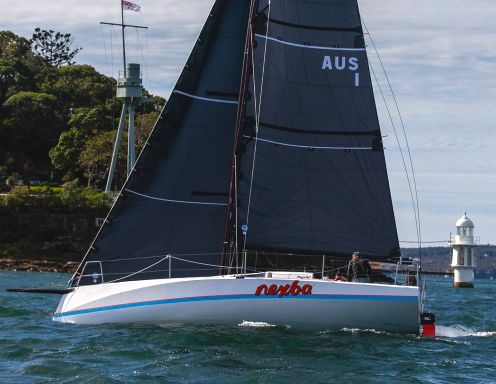 In mid-July, a fortnight after the loss of the first FarrX2 when its keel fell off during a shakedown sail in Australia, SA reported that “the offshore community could be waiting for some time before the full Nexba story is told.”

Well, that “some time” has now stretched to more than four months.

We are still waiting to learn anything useful about the structural failure, or why it took 15 hours before the two sailors were rescued from the upturned hull.

The only formal investigation into the incident is being conducted by a panel appointed by the boat’s host club, the Royal Prince Alfred Yacht Club based at Pittwater, 15 miles North of Sydney.

The club initially advised that it expected to release the panel’s findings by November. Now they say it will be “mid-December”. Whatever might eventually be confirmed about this incident the timing for the release of the panel’s report is likely to be awkward.

The Sydney-Hobart Race will start around 10 days later. Just when the two-handers could expect to be attracting plenty of positive media attention in the run-up to the race, the RPAYC findings will drop like a bombshell.

Even the most sailing-ignorant journalist will have the wit to ask, “But, given what happened to Nexba, is it safe to go ocean racing in these frail 30-foot yachts?”

The likely public relations damage is regrettable; the more so because much of the inevitable negative impact could have been lessened had the responsible national bodies shown the courage to conduct their own inquiries.

The Australian Maritime Safety Authority confined itself to communications issues and made no finding other than that one of the crew’s Personal Locator Beacons was damaged and did not operate.

Australian Sailing – the governing body for the whole sport – said they would wait for the RPAYC report and then decide if any further action was appropriate on their part.

The irony is that had there been loss of life then everyone with any connection to the Nexba incident would have been compelled, by law, to give evidence to a Coronial Inquiry, under oath.  That’s what happened after the 1998 Sydney-Hobart tragedy. The process was certainly long and difficult but it yielded invaluable lessons that have made offshore racing much safer.