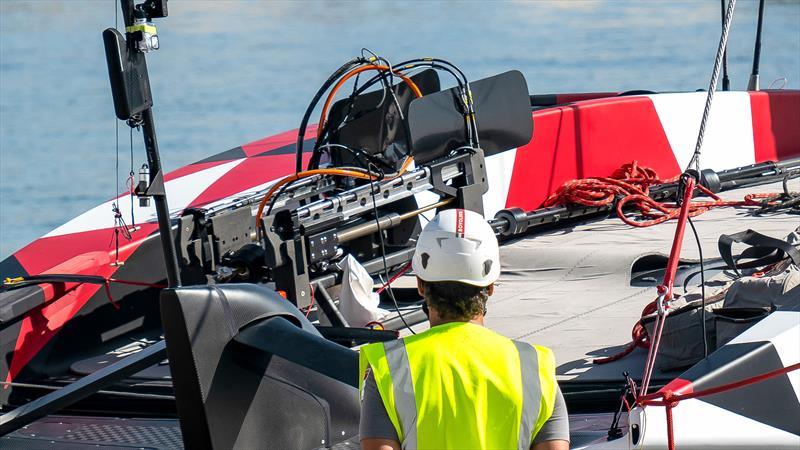 Ponder this, fellow sailors. The Class Rules as published for AC37 contain 1,190 specific rules, formulas, stipulations, diagrams, specifications, and inclusions (and that’s not counting the qualifications and exemptions).

Of these, there are 218 separate line entries that deal with the use of stored power.

In other words, more than a sixth of the rules regulate key aspects of sailing the next America’s Cup boats that don’t rely on humans. These include 101 entries for the “control systems” alone.

That’s the reality: factors that not so long ago were expressly forbidden in the sport (RRS 42 – Propulsion, RRS 52 – Manual Power) are now integral to its most elite event and require exhaustive definition. The exceptions have become the rules.

Where is all this heading? Look no further than the AC40 test boats currently being trialed by the competing syndicates. They all bristle with highly sophisticated hydraulic and electrical technology. Many of these innovations may be admirable in themselves, but they have no real connection with the common types of sailing the rest of the world enjoys.

The AC40s have “actuators” for their boomless twin mainsail luffs plus a large mechanical contraption to control the clews that looks like the innards of an industrial washing machine [see above]. We know from earlier reports and photographs that there’s plenty of even more sophisticated and complex stuff hidden out of view within what is still described as the “hull”.

To my mind the way to halt this runaway craziness is simple: just apply RRS 42 and 52 without exception.

For the America’s Cup, all forms of stored power other than a battery for instruments and communications should be prohibited. Sensible class rules would only govern hull dimensions, construction materials, displacement, rig and sails. That might help restore the Cup to its originally intended spirit as a sailing contest.

If the result was a return to conventional yachts that keep their hulls in the water, well, so be it.

The army of talented designers, builders, engineers, programmers, support teams and sailors who have now made the America’s Cup into a lucrative source of employment will, of course, object. The Cup, they say, has always been at the forefront of new design and technology developments.

That’s true enough, but there’s a crucial difference of principle between ‘then’ and ‘now’.

Even the huge topsail cutters of the 1890s, which were umpteen times bigger and heavier than today’s AC yachts, managed to get around the course using human effort alone. To employ hydraulic or electrical power while racing would have been unthinkable.

Today’s proponents of the ‘anything that makes a boat go faster’ position argue that if the technology is available then there is no rational reason not to exploit it. Yet there must be limits. At what point do these hi-tech AC boats cease to be yachts? They certainly can’t sail properly using only the power of the wind and the crew.   In any case, the whole ‘because it’s there’ pragmatism argument is false. Just because you own a gun doesn’t mean you have to go out and shoot someone.

But the most distressing aspect of this stampede to supplant human skill and strength with electronics and engineering is that the people involved – who are, after all, the custodians of the Cup tradition – seem to have lost all sense of proportion and reality. They assume that what is happening in their extreme little corner of the sailing world has value and relevance to the sport as a whole.

Indeed, the lofty Introduction to the AC Class Rules includes an unqualified assertion to that effect. At 1.3 (c) it claims that the rules will “ensure the class is relevant to the sport of sailing with connection to the community of sailors”.

On the Beaufort Scale of self-delusion, that’s surely an 11.

the glitter and the shits