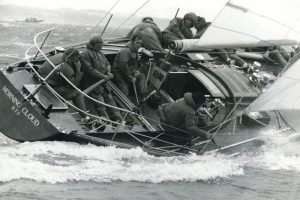 On Saturday 25th August 1925 seven yachts set off from Ryde, exiting the Solent to the east, past the Forts, rounding the Isle of Wight bound for the Fastnet Rock off southwest Ireland where they turned on their heels for Plymouth to be finished by the Royal Western YC. First home and overall winner, Jolie Brise finished in six days two hours and 45 minutes.

This was the first Fastnet Race, known at the time as the Ocean Race, and it would strongly speed up its evolution from being merely a fresh challenge for more adventurous cruising folk into becoming today’s highly refined sport. Famously at a dinner in Plymouth at the race’s conclusion, the Ocean Racing Club was created, with Jolie Brise’s owner Cdr EG Martin its first commodore.

Certainly, there had been offshore, even oceanic races before this. Notably the brave and by today’s standards foolish transatlantic races contested by the brash young millionaires of the New York Yacht Club, the first in 1866 won by a 25- year-old James Gordon Bennett Jnr (from where the English expletive comes), the race best summed up by its departure from New York in December. Remarkably only six died. This was followed by the fourth race of its kind, the more grown-up and part-politically motivated Kaiser’s Cup in 1905, famously won by the 69m three-masted schooner Atlantic. Read on.