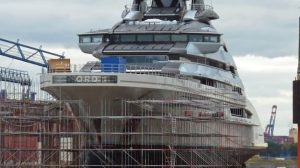 South Africa is choosing not to enforce U.S. sanctions on the $500 million Russian megayacht Nord, which is currently en route to Cape Town – despite a push by the city’s mayor for the vessel to be denied entry.

The Nord is a brand new 10,000 GT yacht owned by sanctioned Russian billionaire Alexey Mordashov. Mordashov, a close ally of Russian President Vladimir Putin, is the owner of mining and metals giant Severstal. Forbes estimates his family’s net worth at about $30 billion, making him the wealthiest man in Russia.