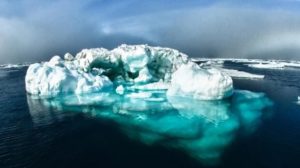 As new information about the rapidly warming Arctic continue to emerge, a new study published last week in Science found that the Western Arctic Ocean is acidifying four times faster than other ocean basins.

With oceans absorbing over a third of all carbon dioxide in the atmosphere, cases of ocean acidification have been on the rise, as carbon emissions remain unabated.

The authors of the study – drawn from Polar and Marine Research Institute at Jimei University, China and the School of Marine Science and Policy at the University of Delaware – say that there is a strong correlation between the accelerated rate of ice melting in the Arctic and the subsequent ocean acidification in the region.

“Acidification is being driven by an increase in atmospheric carbon dioxide. By 2050 – if not sooner – scientists have predicted that Arctic ice will no longer survive the increasingly warm summer seasons. As a result of this retreat each summer, the ocean’s chemistry will grow more acidic, with no persistent ice cover to slow the advance,” said Prof. Wei- Jun-Cai, a marine chemistry expert and one of the study authors. Read on.