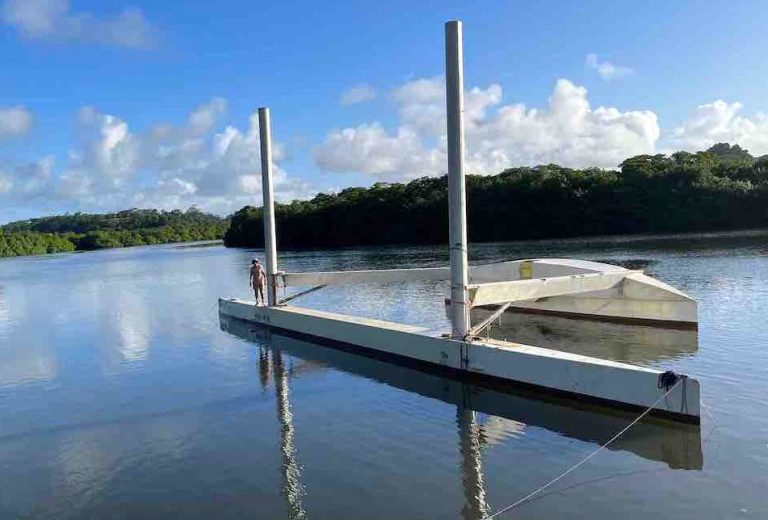 It’s amazing how much has happened in the 4 months since I arrived in Fiji. CATD and my involvement with them has extended way beyond the cargo proa.

Already happening or in the planning stages are: a biogas reactor program running off food scraps and sewage and producing enough methane to cook for 100+ students. CATD got the first of them at a handover ceremony with the Israeli ambassador last week; A cassava flour mill for the bread we are cooking in the student-built bakehouse; a “village/school appropriate” recyclables collection site organized with Recyclers Fiji and help from the local high school; installing a low cost solar hot water system; producing mud bricks; turning unsorted, uncleaned plastic waste into tiles to cover the mud on the boat ramp and turning scrap glass into sand-sized pieces using a locally built kava crusher. The initial use of this will be to substitute for sand in the mud bricks, play with nonslip, hard and reflective coatings on the boat and cover some of the mud around it. Sand is $60 /cubic meter, so we’re not going to get rich, but keeping Fiji’s beaches out of concrete is definitely a feel-good project.

It is wonderful working with people whose first reaction to an idea or suggestion is “Yes, let’s do it”.

Thanks to Sue (my wife)’s grant writing skills, we have been awarded significant UNDP funding to get the cargo proa finished and tested, set up boat building classes for the Women in Fisheries outrigger canoe and the Mini Cargo Proa (incl sailmaking and spar building), get us started on recycling plastic for the MCP deck slats, the cargo boxes and core material for all 3 boats and fund some analysis of routes and production costs.

I was chatting with one of the CATD teachers, who told me his family was the ‘sailor’ clan in his village and he would very much like to help teach the building classes, and that his grandfather was a traditional navigator, keen to pass on his knowledge. Exciting stuff, as the general consensus is that all the old Fijian master navigators had died, taking their knowledge with them. More on this soon, I hope.

Despite my preference for doing rather than talking, I am spending a lot of time talking due to the interest the cargo proa has generated, particularly the launch by the PM’s. We had a 2 day session with the Minister for Rural and Maritime Affairs and a gathering of 300 dignitaries from Korea, the UN, Fiji Govt, NGO’s, donors, green groups and sundry others I didn’t get to meet. The Minister had a look at the boat, then sought me out to apologise for not being at the launch and to discuss problems and solutions. Cargo proa feedback from everyone was overwhelmingly positive.

The Private Secretary of the Solomon Islands Environment Minister dropped in for a look at the boat. The highest ranking person to climb all over it to see what it was about. Nice guy, very knowledgeable about problems and lack of solutions. We discussed the diesel-powered solution being mooted for the Solomons, and agreed it is probably the hardest place in the Pacific to service due to strong winds and big distances. He will send over a group of students for the boat-building classes.

Had a visit from the Maritime Safety Authority of Fiji, a necessary first step in writing the safety rules for cargo proas. It will be a bit of a process, but they (and us) are keen to get it happening. They suggested a local naval architect who I had a long chat with. Fun guy, very practical and knowledgable about boats, how things work here and what is required. He explained what is required, both for the prototype and the production boats, and assured me he could do all the necessary engineering, drawing and paperwork. Big load off my plate. He and the recently retired ex-boss of MSAF visited for a look, were suitably impressed. They said the PM has asked for me to do a cargo proa presentation at World Maritime Day at the end of the month.

I was interviewed for a prime-time documentary on climate change by Estonian TV. Cargo proas are going to be big news in Tallinn! Sue and I spent 2 days running a booth on cargo proas and sustainability at a PIDF conference in Nadi. Nice drive there and back, Fiji has some stunning scenery. While there we met with an old mate of mine who is doing some amazing stuff with uncleaned, unsorted plastic waste. More on this in the next update.

The CATD “Skunk Works” department is playing with plastic foam from recycled PET bottles (soda, water, etc). Glassed each side, it will provide some alternatives to ply, mdf etc, may also have some applications for insulation and low-cost boat cores. They are also working on island suitable lids for the cargo boxes which cool fruit and veges or freeze fish and meat.

Despite the above, work on the boat is progressing well.

We got 20 students to slip the boat after the Prime Minister’s party. All went well until we removed the beams from the masts. One end of the hull was in the water, it floated sideways and the hull, with masts up, capsized. A bit of a bang as the masts hit the beams and a bruise on my finger, but otherwise no obvious problems. Removed the beams, carried them and the ww hull up, righted the lee hull and slid/lifted it up the ramp and onto the level. Most of the time it was on tyres, over which it slid nicely up the quite steep ramp. A village could disassemble it, get the pieces up the beach and prep it for a cyclone in a couple of hours if required. Three tyres (double as fenders) tied under the hulls extends the type of beaches it can dry out on to include the lumpy dead coral typical of the area between high and low water inside coral reefs.

The welding shop is making 3 rollers from 200 kg drums to make launching/recovery easier on the muddy ramp. Hopefully they can handle the load (about a tonne/ton each) without needing too much beefing up. We are applying for funding to extend the sea wall and build a floating jetty, which is starting to look like a marina, with the taro patch to become a car park until it becomes the floor of the proa building factory. We are also exploring some novel bio-concrete options for the jetty construction.

One of the many drawbacks of using big jobs like the wings for experiments is that it takes forever, with a lot of small and repeat jobs followed by waiting overnight for epoxy to cure. Get something wrong, and it has to be corrected 20 times. Not helped by a small workspace, a lot of rain showers and occasional power cuts. 5 wing sections for the first mast and 4 for the second are now built, apart from the trailing edge covering which may be sail cloth sewn on, or peel ply and/or 200 gsm cloth glued on. Once I figured out the load paths and let gravity do it’s thing, it became a lot simpler to set up, but the 1.25 high x 4m lengths are pretty floppy until they are in place, which makes solo handling frustrating. There are some fiddly string lengths to sort out, but each section is now independent of the rest so any adjustments required do not mean adjusting every panel which is a lot less frustrating for an impatient builder.

Replaced the tie down beams with tapered slots. One less thing to go wrong/be maintained and it makes assembly/disassembly much quicker.
Installed the toy box, not sure whether it will need beefing up, but so far so good. The fibreglass lids, hinges and catches work, but need some prettying up, along with much (almost everything) else on the boat. On the plus side, this makes it much easier to change things without having to worry about destroying or maintaining a showroom finish. I might replace the lids with netting, but at the moment, they are easier to walk on than the cockpit floor, which is supported by string lashed across underneath it to make it easy to walk on and catch anything dropped. It needs closer lashings, which I will do when the dyneema order arrives.

Redid the beam/mast attachments (again) to make them easier to tie on and more secure. Still not totally happy with it, I’ll repeat the hull lifting test we did in Brisbane to ensure it is strong enough.
Used tow instead of metal bolts to attach the bilge pump, 4 carbon mooring cleats a winch and the 2 anchor rollers. Not as quick as metal fastenings, but no leaks, lighter, cheaper and a better load spread. More challenging too. There are no screws or bolts on the boat so far. No timber either apart from a bit of cork and the scrap ply the pump is on. The 2 x Sarca 25 kg anchors (thanks Rex) and the Ronstan supplied Anderson winches (1 x #34 and 1 x #40, thanks Tom) are the only metal on the boat so far.

Installed the tender davits using tow to attach them and carbon axles for the sheaves. Looks pretty good and one of them supported half the weight of the tender (double what it will take in use) so another good start.
Mounted one rudder case. Looks workable, I’ll fine-tune the kick-up mechanism when the boat is floating. Still undecided about the other one.

I could not use much tow on the winch due to the bolt hole sizes, but initial tests look like there is plenty. Which makes some of the other carbon tow uses on the boat look like huge overkill. Next challenge is on the Ronstan cam cleats where resin intrusion is a worry, might have to get imaginative attaching those.
So, the boat is progressing nicely. Not as fast as I would like (never is), but fast enough to meet the upcoming deadlines.

Sue and I have just returned from a 2 day CATD staff retreat at Leleuvia to get everyone on the same page about the future direction of the place. Huge fun, lovely people and an exciting vision. We are humbled and grateful to be part of this wonderful community. The only downside was the team I was in carefully selected our hermit crab, then watched it finish a disappointing last in the race to the water. 😉