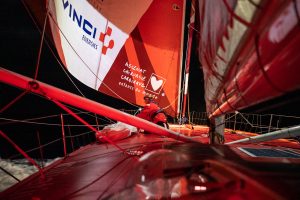 Tonight sees the two ‘Charlies’ still heading each group. American skipper Charlie Enright and his crew (11th Hour Racing Team) are leading the way after passing the Azimut 2 waypoint at 08:26 hours this Thursday morning, whilst Charlie Dalin, heading the fleet of solo sailors on APIVIA, followed suit one hour later.

Since then, the IMOCA skippers have been making headway at a slower, laborious pace, with the vast majority now launched onto a beat. The ETA for the front runners is from 06:00 local time tomorrow morning for the 23 solo sailors still out on the racetrack after Japanese skipper, Kojiro Shiraishi (DMG MORI Global One) retired last night for personal reasons. Signed up for a longer course, which will take them on a slight detour via Penmarc’h, the four crews are due to make the finish from noon. More here.

y is the answer, not the question