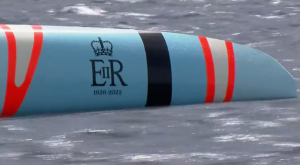 After being joined by the other Commonwealth teams in San Tropez SailGP (NZL; CAN; AUS) for the lowering of the Union Flag to half hoist Team GBR added a logo to the bow of their 50-foot foiling catamaran. Her Majesty Queen Elizabeth 2 was Patron of the Royal Yachting Association with her daughter Princess Anne, the Princess Royal being the President.

This was followed by words of respect from a clearly emotional Sir Ben Ainslie to the assembled media where he stated “an incredible life, perhaps the most incredible life that’s even been lived” perhaps summing up the feelings of many around the world.

the eyes have it