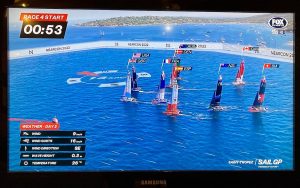 To TV or not to TV, that is the question…

Those of us who feel cheated by America’s Cup and SailGP races that take just 10 or 20 minutes to sail are entitled to ask this question: in what other major sport are the rules so arbitrarily bent to cater for the presumed demands of television?

The Olympic marathon doesn’t stop at the 5-mile mark. The finish of the Fastnet isn’t off Land’s End. The chequered flag doesn’t come out at an F1 Grand Prix after the first few laps. Indeed, it is the generous timespan of those events that helps give them their unique appeal. There needs to be time for the drama to unfold – for all the variables of skill, endurance and luck to play out.

But the format is now the overpowering function in sailing. While the rest of us are happy to compete for two or three hours racing around the cans (or three or four days offshore), the elite international yachting events have become like the proverbial Chinese meal. An hour or so after you’ve scoffed down the Pork Chow Mein you’re hungry again.

This emphasis on drastically short time limits has long-term significance. Ostensibly a response to the demands of television schedules, these forms of abbreviated racing have a distorting effect.

Last weekend a SailGP race in France was abandoned after just 14 minutes because that time limit had been reached. Less than a quarter-hour! Yet even then, the organizers struggled to complete the regatta schedule before the TV timeslot ended.

There was a far more damaging example of this self-imposed problem at AC34 in San Francisco back in 2013. Fans will remember the fateful Race 13 when New Zealand was at least half a mile ahead on the final leg. They had the finishing line in sight and were poised to win the Cup. But the 40-minute time limit expired and the race was abandoned. The Kiwis never recovered.

These days 40 minutes for a foiling event would seem an eternity. Race management teams are forever tweaking their formats in increasingly desperate attempts to reduce all yacht races to an intense, high-speed sugar hit – a ‘good fit’ for television.

To my mind, this is a largely pointless exercise. Any assumed gains in audience are canceled out by the way the extreme compression of each race changes the whole shape of the sport.

The fundamental problem is that sailing is a notoriously poor TV product for anyone other than sailors. It has minimal general appeal. The broadcasters know from experience that the high cost of mounting ‘live’ coverage is rarely justified by the levels of audience and advertiser support that coverage manages to attract.

That’s why most of the programs devoted to sailing that we see on mainstream and Pay TV are produced or funded by the event promoters and sponsors. They then provide that material to the networks, free of charge. Sailing very rarely earns its TV timeslots on intrinsic merit.

But why is the sport at these elite levels so willing to jettison its traditional regatta formats just to secure television coverage? The answer, as to most questions of this kind, is money.

Staging and competing in these events have become so expensive that everyone involved has become dependent on sponsorship. Naming rights and signage are sold on the promise of mass international viewership. So the event organizers are happy to configure their regattas into any format that might secure them a broadcast deal.

But tailoring your sport to TV can be counterproductive. In the case of SailGP, where the total TV transmission timeslot is around 90 minutes per day, the actual racing takes up no more than a third of that time. The rest is padded out with build-up hype, travelogue fluff, endless replays, and repetitive interviews with the skippers. The made-for-TV tail is wagging the dog.

Meanwhile, the most prestigious – and most-watched – events all still run at their traditional lengths. Golf tournaments take four days and are played over 72 holes, as they have been for more than a century. All four grand slam tennis tournaments are still best-of-five-set matches that often exceed four hours before a winner is decided.

It is television that has found ways of making their coverage of those sports more attractive, not the other way around.