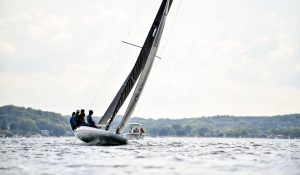 The A Scow is a unique class: it features the largest spinnaker trimmed sans-winch in all conditions and looks more like a 38-foot-long surfboard than a sailboat to some. But, this class is home to some of the fiercest competition in the Inland, with competitors such as Rolex Yachtsmen of the Year Harry Melges IV, Eric Doyle, and Brian Porter, among other legends, taking part in the Inland Championship in 2022.

This year it was Bo Freytag’s team ‘Smiles’, with Melges IV as tactician, who claimed the title. We can’t find official history, but this team of all 21-year-olds is almost certainly the youngest A Scow Inland Champion team ever, and their 7,1,5,3 scoreline was a super consistent run of finishes in a regatta peppered by inconsistent conditions. Freytag’s team, along with most of the A Scow fleet, have made the switch in 2022 to the Vakaros Atlas 2 as their instrument of choice. Why is that? We asked Harry what made the choice so easy, and how trusting your instrument is such a huge key to success on the water. More here.