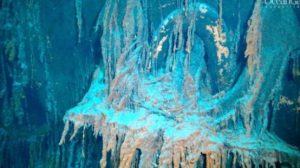 Almost 37 years to the day from when a team from Woods Hole Oceanographic Institution first located and photographed the wreck of the Titanic, a new expedition has returned with the most detailed images captured of the vessel. Seattle-based OceanGate Expeditions released the amazing 8K video footage showing never before seen details of the ship that famously sunk on its maiden voyage in April 1912.

Exploring the wreck that is sitting on the floor of the ocean 380 nautical miles from St. John’s, Newfoundland, Canada, the 2022 Titanic Expedition promises new revelations, as well as documentation as the wreck, continues to disintegrate. The exploration team used new technologies which it said are critical in helping scientists and maritime archaeologists characterize the decay of the Titanic more precisely. More.

i walk the line