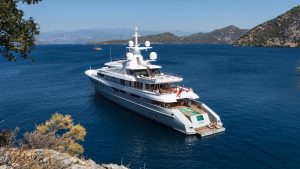 The Russian-owned superyacht Axioma has been auctioned off to the highest bidder, completing the first seizure and forfeiture process for a sanctioned asset since the beginning of punitive sanctions on the Russian elite earlier this year. According to Bloomberg, the luxurious vessel attracted no less than 63 bids.

In March, the $75 million, 236-foot Axioma was arrested in Gibraltar. Her owner, Russian billionaire Dmitry Pumpyansky, had been added to U.S. and UK sanctions lists in connection with the invasion of Ukraine. Western sanctions have targeted business magnates who have ties to Russia’s political leadership; Pumpyansky’s pipe making conglomerate is essential to state oil and gas production, and he was personally awarded the Order for Merit to the Fatherland by Russian President Vladimir Putin in 2014. Among other effects, his listing breached loan covenants on a $20 million mortgage on the yacht. More here.