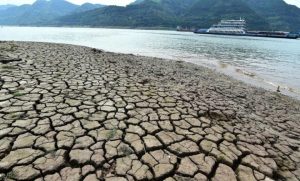 Do you remember when Mango Mussolini called global warming “a hoax“?  We sure as fuck do…

While attention is focused on the falling water levels along the Rhine and its impact on Germany and Europe, word comes that China is facing a similar challenge along the Yangtze, the country’s longest river. Always one of the most important inland waterways in the country, China in recent years has invested heavily in the Yangtze seeking to enhance its role both in supplying inland regions and becoming an increasingly important pipeline to move exports to the major seaport at Shanghai located on the Yangtze Delta.

As southern parts of China endure historic heatwaves and drought, water levels at Hankou, a key monitoring point on the Yangtze River near Wuhan dropped to 17.54 meters (57.5 feet) last week, which the authorities report is about six meters (20 feet) lower than the average in recent years. According to local media, citing Chinese disaster response authorities, this is the lowest level seen for this time of the year since records began in 1865. More here.