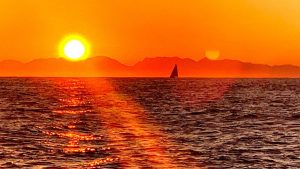 Monday 15 August, 2022: After nine days of racing 21 teams are still competing in the Sevenstar Round Britain & Ireland Race. All bar three of those teams have rounded St Kilda, the isolated Scottish archipelago in the North Atlantic. Pip Hare’s IMOCA Medallia has rounded Muckle Flugga, the most northern extremity of the course. The international fleet is forecast to experience low pressure for the first time in the race; a building northerly wind is expected to arrive tonight. After nine days and nights of sweltering heat and little wind the teams are preparing themselves for stronger winds to come. The majority of the teams are past the midway 900-mile waypoint and there is optimism for a faster second half of the race.

Pip Hare’s IMOCA Medallia was the first boat to round Muckle Flugga on the eighth day of the Sevenstar Round Britain & Ireland Race (14th August 17:09:33:31). Described by Medallia’s watch leader Paul Larsen as the ‘Cape of the North’. The crew of Medallia were elated to be finally turning south and looking forward to the possibility of fast downwind conditions in the North Sea.