it’s getting hot out there 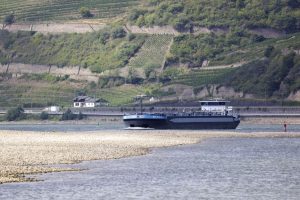 The falling water levels on the Rhine River are getting critically low, according to German officials, and could severely restrict traffic between the Lower and Upper Rhine at the town of Kaub as early as Friday. The low water is already putting a drag on German commerce due to reduced draft for inland traffic; a partial shutdown at Kaub would put more drag on Germany’s economy, which is already heavily affected by sky-high natural gas prices and the prospect of an impending cutoff of Russian energy.

The Rhine carries a substantial share of Germany’s petchem, crude and coal cargoes, among other commodities, and it provides a vital connection to the Port of Rotterdam, the largest seaport in Europe. Barges on the Lower Rhine deliver bulk materials to the industrial heartland of Germany, the Rhine-Ruhr region. The port of Duisberg, which serves this trade, is the largest inland port in Europe. Read on.