that was the week that was

Continuing on from our look at the weekend racing of the 2022 Cowes Week. 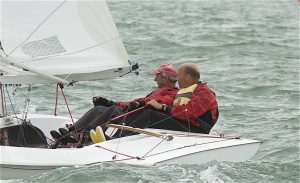 The first thing I would say is that this cannot be a full and complete report as with 30+ classes racing for 7 days would take a book. For those who would to see a fuller report on the week’s activities and racing they should visit www.cowesweek.co.uk.

An extremely well-oiled machine where much of the year-long effort to produce such an outstanding regatta is fuelled by enthusiastic volunteers producing an extremely professional event. They even have VAR on some start lines to identify early starters avoiding the dreaded third gun and a general recall. And they are guns on the Squadron line, miniature cannons so there is no excuse for not hearing them.

The 2022 event, just four years short of their centenary – yes the first Cowes Week was 1826 – was by Cowes Week standards a relatively small affair with JUST 450 or so boats competing but for all that was as competitive as ever. (Big years give quadruple figures a fright.)

An amazing event with, for some, it being one of the few regattas they do each year while elsewhere one boat sported a VOR winner on board while on at least one day a quadruple Olympic gold medallist was at the helm of a competitor (yes, they won but by just 53 seconds after a 30-mile race and that was with Sir Ben driving). One young dinghy sailor commented that she wasn’t used to helming such big boats but she learned lots from watching how the other guys did it and it was amazing to be able to concentrate on just one task while someone else took care of the tactics or strategy – all part of the learning curve.

Naturally, with 30+ classes on the water, there was somewhere countback was required while in one class, the Flying Fifteen, Men Behaving Badly (pictured above) scored only bullets to be the runaway victor. The Flying Fifteen, by the way, although with a worldwide reach could be considered a local boat as it was designed by none other than Uffa Fox who lived not far up the River Medina which bisects Cowes itself.

The classes are divided up into the White Fleet (the dayboats) and the Black Fleet (the cruisers and racers) with prizes beyond class victory to being top of either Black or White and the ultimate accolade being the overall Cowes Week winner. Don’t ask me how they do it but in all the years I have been following Cowes Week, or actually being there on the water, I have never heard any dissension regarding these three top winners.

With 7 from 7, The White fleet was won by Ruper Mander’s Flying Fifteen, Men Behaving Badly capping his week with a 2 and a half minute victory in Race 7.

Over in the Black Fleet the winner’s prize went to Peter & Alison Morton’s wonderfully restored Swan 36 which was able to discard their worst result, a second, leaving them with six firsts, along the way winning their class with a da to spare. As this fleet was considered the more competitive they also deservedly took out the Overall Cowes Week accolade – not bad for an old boat, who says IRC doesn’t work.

So there you have it, a regatta where the three main ingredients came together, a fair yet competitive fleet (or fleets), an impeccable, practiced, and well-oiled organization, and even mother nature playing her part with sunshine sailing for the week while the wind was all the way from relatively light through manageable to almost too exciting for some classes without getting quite as far as gnarly.

don’t be a stranger