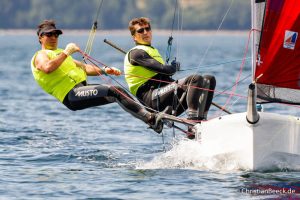 Fifty-two International Fourteen from six nations attended the 2022 World Championships hosted by the FSC Club in Flensburg, Germany. After a 12-month delay due to COVID, the Championships faced an additional challenge due to the global costs of containers, preventing USA and Australian fleets from attending. The event showcased the growth of the class in Germany with 30 boats from the host nation, many of whom were attending their first i14 championship.

As a development class, the i14 is well known for introducing new technologies to sailboat racing. This year, the fleet focused more on refinement with no significant innovations. The B6 virtual one design from Ovington was to be joined by a new production run of Hollom 3’s built in Germany. Both boats offer race-winning levels of performance off-the-shelf, which will be vital to attracting newcomers to the class in the build-up to Garda 2024.

The number of female helms and crews at the championship was a real talking point. Flora Preisinger (GER), Lauren Laventure (Can), Katie Nurton (GBR) and Angela Denninger (GER) would all be competing for a top 10 result. Under-25 Teams from Canada and Hawaii also participated in their first world championship.

Conditions were similar on Day 2, with an unstable, bandy south-westerly making for a shift and position day. Off the line, German National Champions Dennis Gehrlein and Lasse Nielandt showed a good turn of speed before Massey and Hillary took the lead, having mastered the positioning on the course. Shaw-Struckett and Truswell-Fitzgerald rounded in second and third and set out to close the gap to the leader. Downwind pressure bands created the opportunity to gain or make massive losses. Truswell used this to great effect, closing on the downwind legs and setting up a tight beat to the finish. Massey maintained a loose cover to take the win.

After abandoned racing on day three, two races were scheduled for day four. Massey and Hillary again lead at the windward mark, followed by Peter Bromley, Hugh McLaren, Oliver Voss, and Eike Ehrig. Shaw-Struckett made significant gains downwind to take second and put pressure on the leaders at the final leeward mark. A taking battle ensued with Massey-Hillary pulling out to take another win. Behind George Borkenstein and Eike Dietrich sailed brilliantly to work through to third

The day’s second race saw Massey-Hillary take a 100m lead at the 1st mark after playing dot to dot with the pressure bands. Behind Voss and Ehrig (GER) rounded an impressive second with Shaw and Truswell. Massey finally showed a chink in his armour and missed a band of pressure to allow Truswell to take the lead, which he maintained to the finish. Shaw and Stuckett finished in 3rd to stay locked in a tight battle for the podium places.

After the lay day and the dangers of the Tiki Bar, the fleet returned to racing with a more stable but still patchy south-westerly. With wind on the edges of the course, Truswell approached the 1st mark from the right, and Massey-Hillary took one more hit into the top left. In the end, the left was stronger, Massey led again, with Truswell second and Voss third. An aggressive gybe set from Truswell and capsize from Vos pulled Shaw back into second and Truswell recovering to third.

Day Six was the opportunity for Massey and Hillary to take the title. Finally, they had to settle for second at the weather mark with George and Jack Yeoman sailing an incredible windward le with Pattison and Tait in 2nd. Having led for a lap, Yeoman positioned himself ready for the forecasted right shift and lost out to Pattison and Massey. On the next beat, the right shift came in, and Massey again read the conditions best to take the lead. Massey and Hillary took their 5th bullet and the World Title at the line with Pattison in 2nd, and a fantastic third place finish for George and Jack Yeoman.

The final race set up a battle royal between Andy Shaw & Rob Struckett and Glenn Truswell & Ed Fitzgerald – level on points with the latter ahead on countback. Sadly, the forecasted wind failed to arrive before the cut-off time and the race was abandoned.

Overall, the FSC and German fleet hosted an exceptional event. The i14 Class will cost their 2023 Europeans in Lake Como and a 2024 Worlds in Torbole. Foreteens are Forever.

have a hobie day. again?