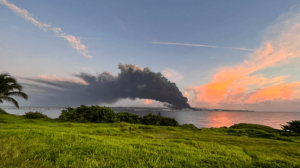 The fire at Cuba’s Matanzas tank farm has spread to two more giant storage tanks, bringing the total to four and increasing the complexity and challenge of the firefighting response.

The fire started with a lightning strike on one tank at the Matanzas Supertanker Base east of Havana on Friday night. On Saturday morning, the heat and fire from the burning tank ignited the adjacent tank, causing a massive explosion that left more than 120 injured and 17 missing.

Late Sunday night, the second tank collapsed after about 40 hours of burning, leading to a sudden release of fuel and an accelerated rate of combustion. The light from the explosion could be seen as far away as the Havana boardwalk, according to social media posts. More here.

turns out we were right anyway