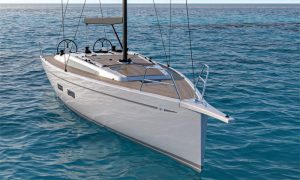 How do you make the follow-up to an ORC World Championship-winning design even better? Cantiere Del Pardo pulled out all the stops…

If it looks right, it probably is right. Generations of sailors, boatbuilders and yacht designers used to swear by that simple rule of thumb. Even today, when the science of CFD modeling has completely replaced the instinct of the designer’s eye, the shape that looks best is still sometimes the fastest. Witness the graceful, swooping curves in the topsides and aft quarters of Matteo Polli’s Grand Soleil 40. Two of the great 20th-century designers, Kim Holman and Olin Stephens, would no doubt approve.

The naval architecture of Polli’s contemporary racer-cruisers, like the GS 40 and GS 44, has very little in common with the hull shapes drawn 60 years ago by Holman and Stephens, but they share the same very strong focus – unlike many other sailing yachts back then and also right now – on maintaining the hull’s balance of volume through a wide range of heel angles. That’s why they handle so well and often win races despite being less aggressively endowed with sail area and form stability than some of their rivals. Less rudder action means less drag as well as a more controllable and enjoyable boat to steer. More here.