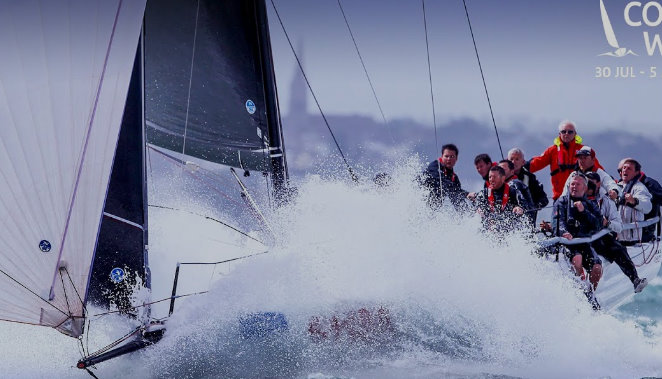 Last Saturday saw the first day of racing in Cowes Week on the Solent which is recognised as one of the most challenging waters to race on while a relatively short distance away in Plymouth, 9 SailGP catamarans did battle in the UK event on their calendar.

I have to admit to being somewhat mystified why the SailGP organisation would choose to hold their event on the same weekend as the opening weekend of one of Europe’s, if not the world’s largest and most well-known regattas, surely their calendar is not so restricted that a different date couldn’t be chosen although I am sure they had their reasons.

One could argue about the relative merits of the two events but without being too long-winded, one serves the public with a show while the other is a competitive event for the sailors who would rather do than watch.

The SailGP Plymouth event, in the main, delivered but still has a way to go to attract the numbers that would bring sponsors rushing to the table. From a personal point of view, and I admit it is personal as there are those who think it is amazing, there is some way to go with the coverage.

From the racing point of view, I noticed some negative feedback regarding the committee not relaying the course when the wind shifted. The event is on the clock regarding coverage and maintaining spectator interest and as sailors, although a start line has a ‘normal’ angle to the wind I am sure we have all had to negotiate running starts, reaching starts and everything in between ad would expect high end pros to be at least as able to adjust.

The other piece where I saw a comment was about the ‘corrupt race officials’ regarding excluding GBR from the final. I don’t recall who made the comment but ‘really’? With boats traveling at the time at 28kts (I refuse to use land speed in a sailing event) and perhaps Slingsby’s alteration was a ‘Hollywood’ but you are talking a split second between clearing the port taker and taking its rudders off. An aggrieved Ainslie remonstrated (nobody likes to be penalised) with the Chief Umpire, Craig Mitchell but to no avail. Craig, by the way is one of the most experienced ‘high speed’ umpires on the planet.

The actual racing was at times very exciting with multiple position changes spoiled by the hyped commentary – yes, it WAS more enjoyable with the sound down.

At times I felt they needed to engage brain before opening mouth. At one point Ben Ainslie “catapulted from 6th place all the way up to 5th” while elsewhere a boat was observed to be “second place on distance”- is there any other way?. While at one point when boats were doing a max of 70 KPH ☹ it was stated “Fastest Race on the Water”. Clearly never heard of America’s Cup 36. But best of all a boat was quoted as “sailing straight up the land line” (no need to tack for the mark) I  would have thought a modern event like this would have at least be on mobiles.

Anyway, periphery issues aside the racing had quite a lot of excitement to it and a significant turnaround for one team in particular. Whether the inclusion of Olympic Gold Medallist Jo Aleh  as strategist was the catalyst of not, I’m not sure, but Team New Zealand seemed to find a different gear in Plymouth to eventually take out their first regatta win which propelled them all the way up the leader board into (currently) in the running for a podium finish an access to the ultimate winner take all final.

Australia maintained their overall season’s lead and despite a disappointing end to their Plymouth event Sir Ben Ainslie’s Team Great Britain retained the second slot in the overall standings.

While all that was happening in Plymouth Sound, over on the Solent over 450 boats were competing in the first two days of Cowes Week, an event that has only been in the sailing calendar since 1826.

The Solent is one of the most challenging pieces of water to sail on, never mind race on with unusually 4 high tides a day and  so popular/complicated there have even been books written on how to best use the challenges of this piece of water.

Starts are a combination remote from Cowes, usually over towards the northern shore of the Solent or off the Royal Yacht Squadron on the ‘Squadron Line’. Starts here are signaled with small cannons with the line often producing challenging tidal conditions for the racers.

With 35 classes to get away and a couple of them having more than one race it was (and will continue to be) a busy time for the race committee who, with literally centuries to learn and improve, is like a well-oiled military machine. Then throw into the mix of potential general recalls and one gets an idea of the organisation required for Cowes Week to run as smoothly as it does.

Breeze started in single figures but built on the Saturday into the 20s and Sunday didn’t disappoint either. Play of the day, in fact play of the weekend has to be in the IRC 0 start with most of the boats hanging back fearful of being carried over (a return against the tide would be very expensive) Fargo (GBR86R) popped out from the Squadron end of the line and port tacked the lot and went on to hang on to pole position on corrected time showing the importance of a good start especially when it includes the balls to port tack the fleet. She was followed home on corrected time by Gold Roman Bowl winner, Dark ‘n’ Stormy which repeated their 2nd place on Sunday to lead the class while Fargo, sans perfect start, propped up the fleet.

Too many classes to record details of each and every one but the regatta has an excellent website at www.cowesweek.co.uk and includes a professional and knowledgeable video wrap-up either on the site of by searching Youtube.

So on the one hand the weekend provided high-speed sailing to watch for the masses and a mere 110 Miles (of the nautical variety) along the coast slower sailing perhaps for people to do while of my memory of Cowes Weeks past also a significant number of people enjoying the spectacle from the shore and most likely, with boats attempting to cheat the tide, seeing the action much more close up especially on the shore along Cowes Green.

Which is more important for sailing? Well, that is impossible to judge. Any display of our sport in all its glory cannot be anything but good for our sport. It would be like comparing apples for oranges. SailGP is not yet the complete event but it is on its way and easy to forget in the heat of the moment that it is only in its third season. Certainly one shouldn’t forget that without the financial assistance of Larry Ellison the event would not be happening and for those who criticise his motives I would say that he’s spending his money on our sport and we should just be grateful but the clock is ticking and pretty soon the event may have to stand on its own two feet.

Cowes, on the other hand has almost 2 centuries of history and is an entirely different event. This weekend has, if nothing else, displayed the vast panorama for people viewing or sport and the almost endless variety the game can be played based on budget and experience.

A successful weekend for UK Sailing