who will save your sole? 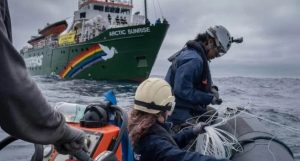 Greenpeace is warning of the effects of industrial longline fishing on shark populations after its activists confiscated fishing gear from two vessels in the North Atlantic, one of which was operating in a Marine Protected Area.

The NGO announced that its activists aboard the Arctic Sunrise operating in the North Atlantic waters confiscated 30 kilometers of industrial fishing gear and 286 hooks from two European industrial longline fishing vessels, Segundo Ribel and Siempre Perla.

The longliner vessels from Spain were fishing for sharks and swordfish. Past analysis of total catches of swordfish and blue sharks in the North Atlantic shows that the approximate ratio of blue shark catches compared to swordfish is one swordfish for every five blue sharks. More here.

how not to train your dragon