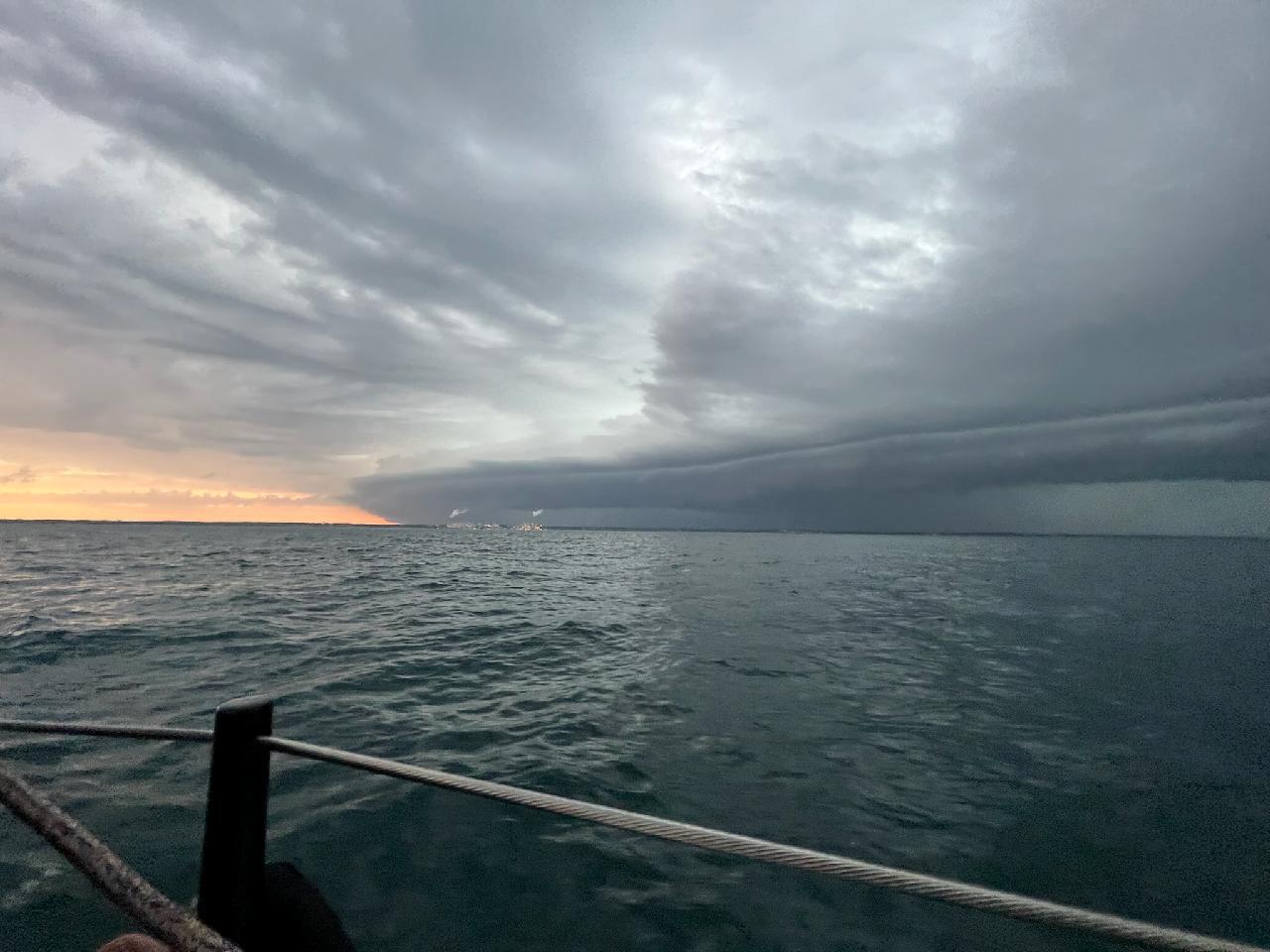 This year I had the pleasure of racing both the Mackinac races with Bill McKinley’s Ker 46+ Denali 3. Not only is it a good design, but it’s kept in perfect shape. Most of the crew have been sailing together for years. This was my 8th Chicago to Mackinac race, so I’m no stranger to the storms you can see on the Great Lakes, but this year was a big one. Our team did a pre-race weather briefing with Chis Bedford. In that briefing, I learned a new term Mesoscale Convective System. This is when a complex of thunderstorms becomes organized on a scale larger than the individual thunderstorms and typically persists for several hours or more. What does that mean… it means hold on tight! Weather GRIB files and navigation routers can’t do the math to tell you what exactly will happen in an MCS.

I woke up Saturday morning to a 5 am thunderstorm in Chicago. The wind was blowing 15-18 knots out of the South. Our game plan was to do whatever we could to sail north up the lake as fast as possible. There was a chance that the MCS would cross the southern part of the lake, and if we could be north of it, the weather would be less severe. This didn’t happen; the storm covered about 200 miles north-south. We also wanted to keep to the west so that we had 60-80 miles of lake to run with the storm if we needed to. Natalie J and Heart Breaker did the same thing. There was no escape; here is the radar when we got hit. We were just south of Milwaukee.

About that cloud at the top of this article…Once we saw the cloud line, we put a reef in, then hoisted the J4 and took down the spinnaker. We did it before the wind came up and even had time to pack the spinnaker. We also made sure everyone got into their gear early so that when the weather did hit we had everyone on deck. The most wind we saw was in the second “cell,” and it had 38 knots. The wind wasn’t too bad, but the amount of rain was crazy.

Huge raindrops, and in 30 knots of wind they hurt and sting. After the “purple” part of the radar had passed us and we were back in the “red,” we were back racing. The wind was 25 knots we kept the reef in and set our A6 (Frac) just in case a new cell developed and took off across the lake towards the Manitou Passage. After a little bit, I was handed the helm; it was time to LIGHT IT UP.

We were screaming along, sitting on 19-22 knots of boat speed. The whole team was stacked in the back starboard corner of the boat. With the lake chop and night, it was hard to keep the bus moving. There was one big wave I drove through, I was waist deep in water and it pushed Norm Berge aft and into the mainsheet winch as he was trimming the spinnaker giving him a nice bruise.

At the same time, Scott Ewing was just at the hatch and going to bail out the boat he held on to the hatch. He was so far underwater he had to hold his breath and his life jacket auto-inflated! I couldn’t help but start laughing.

After about 2 hours of that, we had to furl the A6 up the; then was up to 30 again and the boat was becoming too hard to steer with the chop. We changed to our J0 on the strut and put up the J4 and SJS (storm jib staysail). The boat was easy to steer and still ripping along. By morning the wind was easing up and we were back sailing on our A2. The rest of the race was a nice downwind sail all the way to the finish.

Surprisingly there didn’t seem to be too many boats with damage. It was a quick race up the lake for the whole fleet. A large bulk of the boats finished early Monday Morning.

We ended up winning Class 1 and being 2nd overall.

one for the old schoolers