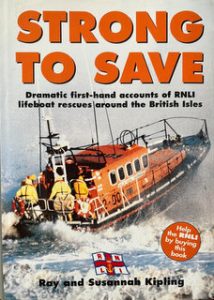 Given the heaps of discussion about the Loic Escoffier recent capsize (thread here), this article seemed particularly relevant.

I have been a long-time supporter of the RNLI (Royal National Lifeboat Institution. This is a British Isles charity (Great Britain & Republic of Ireland) that has saved literally thousands of lives over its history and remains fiercely outside government control with the vast majority of crews putting their lives on the line for people they have never met, (and very often never meet again) regardless of nationality.

I was also an RNLI SEA Check Adviser for a time before coming to China. This was a free service to yachties to have the safety equipment on their boats checked out against a prescribed list depending on the type of water their boats operated on.  I never lived close enough to a lifeboat station to apply to become an actual crew member but perhaps I wouldn’t have had enough selfless courage to volunteer in any case. These guys often head out into horrendous conditions when everyone else is scurrying for cover.

It is good to see however that when the RNLI update their boats (the all-weather ones cost in excess of GBP2m they sell on those replaced with, now, around a dozen or so former RNLI boats continuing their service off the coasts of China.

I have a substantial boating library and have just finished reading again ‘Strong to Save’ by Ray & Susannah Kipling. The amount of research they must have done is awesome.

I noted inside the fly cover that I obviously bought this book second-hand some time ago so it is quite rare these days although having checked Amazon (UK & USA) there are around 30 copies and there are bound to be others in independent books shops also.

An amazing piece of research by the authors with mentions of rescues involving almost every RNLI station around the coasts of the British Isles.

There is a tale of daring do on almost every single page with the most remarkable thing being how matter of fact the lifeboat crews are in describing what were often life-threatening situations – threatening not only the casualties but also the lifeboat crews with many remarkable pieces of seamanship. I am not ashamed to say I had to stop reading many times to take on board just what was being described.

Remarkable people, not just men as many lifeboats have women in their crews also and I strongly recommend to try and go grab one of the copies advertised on the internet.  A bloody good read.

I was once the subject of an RNLI ‘shout’ (the term for a call-out). In my teens, my buddy and I were sailing in an area on the Tay Estuary called ‘The Hash’. It was a blustery day and the dinghy would go over a wave, heel dramatically, down the other side, and start coming back on top of us. We were having an absolute blast. We then noticed the inflatable Inshore Lifeboat (ILB) heading roughly in our direction and started to crane our necks looking for someone in trouble. After a short while, it became obvious that the ILB was heading directly towards us and came to a stop alongside. The helmsman was Hugh Scott, (another of his volunteer roles was cadet officer at the Royal Tay Yacht Club). “What the hell are you doing out here?” came the question. Well, we thought we were having fun but apparently, an old dear on the shore overlooking the area thought we were in trouble and had called the Coastguard- Oops!

We were told in no uncertain terms to head back to the club – well we were 4 miles up-estuary from there. A salutary lesson.

The RNLI, a UK-registered charity, will receive nothing from the second-hand book sales however I shall forward my fee from this article directly to them. Reading the book reminded me of just how remarkable the human spirit can be.