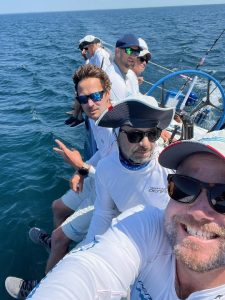 That’s North Sails San Diego loft manager Brian Janney’s smiling face from the weather rail of the Ker 46+ Denali 3 today as they near the finish of the Bayview Macinac race.  They have just finished and won their class by 6 minutes over the Botin/Carkeek 58′ Talisman.

Speaking of time, check out Brian’s schedule; He was aboard Pyewacket 70 on their fab race to Hawaii via the Pac Cup. The day they finished on Thursday, he grabbed a red eye to San Diego, where he was there for all of 3 hours while he changed bags. Then flew to Detroit and arrived at 2 am Saturday.

They Started this race at 1:30 pm that day, and will be finished today, and then just a few days later, he’s off on the Chicago Mackinac race. No rest for this rock star!