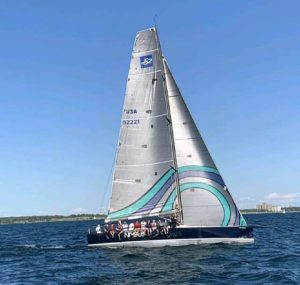 One of the great things about racing sailboats is the quality of the people you meet. The majority can be summed up in a couple of words, honor, dignity, and respect.

But like the rest of life, sometimes there are a few bad apples, and after tolerating their boorish behavior for years, eventually they step so far over the line that they deserve a time out.

During the Wednesday night race in Buffalo last week, Eric Tanski, a crew member on the TP 52 Nimbus didn’t like the way the race committee set the course, so he grabbed the VHF radio and dropped a bunch of F-Bombs to them.

Finally, enough was enough, and Eric and the boat Nimbus have now been excused from further participation in all Buffalo Harbor Sailing Club events through early September.

Whether US Sailing takes further action remains to be seen, but it’s a very real possibility. The legend Paul Elvstrom said it best – it’s really the code of honor in the sport – “If in the process of winning, you have lost the respect of your competitors, you’ve won nothing”.

PROTEST COMMITTEE NOTICE #001 – RESULT OF RULE 69 HEARING • On July 12, 2022 the Protest Committee conducted a rule 69 hearing against Eric Tanski (crew) and Jack Kitrenos (boat owner). • As a result of this hearing the Committee has determined that Eric Tanski has committed misconduct under Rule 69.1. • The Committee has penalized Eric Tanski with an exclusion from all BHSC organized events, effective immediately, through September 8th, 2022. • The Committee has also penalized S/V Nimbus, Sail #52221 with a score of DSQ for Mid-Summer Series Race #1, and has excluded S/V Nimbus, Sail #52221 from participating in the remainder of the BHSC-organized Mid-Summer Series. – Peter Huston.

to whom it may concern