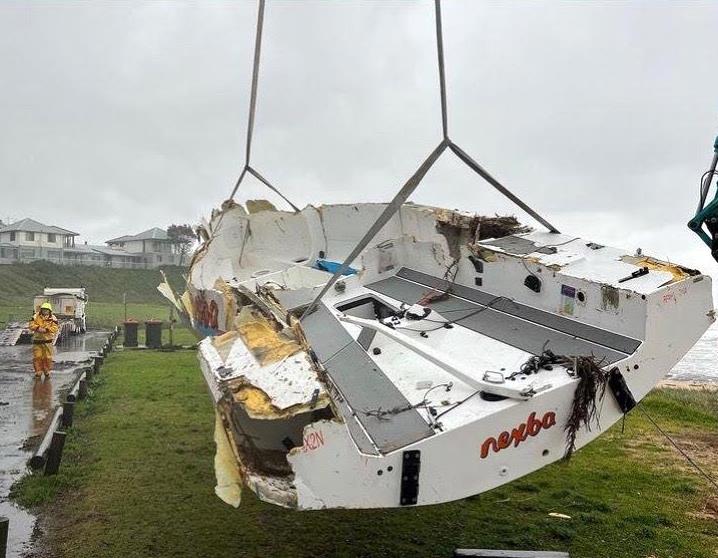 Now that the initial shock and flurries of speculation have subsided, the real task of determining what really happened in the Nexba capsize begins. It was an incident that involved an incredibly lucky escape for the sailors, but now poses a long list of crucial questions for everyone involved.

(For those coming in late: Nexba was a brand new FarrX2, a 30-footer designed for two-handed offshore racing. It was being sailed off the Australian east coast by two experienced women completing the 100nm overnight passage required to qualify for the Sydney-Gold Coast Race starting on July 30. The boat capsized when the keel fell off around 1:00 am in worsening conditions. The women were rescued from the upturned hull 15 hours later.)

When news of the capsize and rescue broke there were immediate public assurances from Farr Yacht Design and the host club, the Royal Prince Alfred Yacht Club, that the incident would be thoroughly investigated. The Australian Maritime Safety Authority is also expected to conduct its own investigation. The national governing body of the sport, Australian Sailing, now says it will support the RPAYC inquiry rather than conduct a separate investigation.

But what of the two sailors, the only primary sources who could tell us what really happened? They’re not talking. Skipper Alice Tarnawski and crew Clare Costanzo say they are not able to speak until the various inquiries have been conducted.

There is, however, no compelling legal reason for them to maintain this silence. They have apparently chosen to do so at the request of their club and Australian Sailing. That is, of course, their choice but it does have the effect of giving all the agencies and individuals with an interest in the incident time to prepare their positions before any first-hand details are made public.

This caution is understandable. These are people and corporations with major reputations and revenues to protect. Farr reportedly had 10 of their X2s on order – at a minimum $205,000 each. There are also significant warranty, insurance, and ‘duty of care’ implications.

But the offshore community could be waiting for some time before the full Nexba story is told. The club is yet to even confirm the Terms of Reference for its inquiry. Nevertheless, we are free to ponder some of the questions the various investigations might ask.

None of the statements released immediately following the capsize suggested the yacht had hit a submerged object. So, was the keel failure a fault of its design, manufacture, or installation – or a combination of all three?

Was it appropriate for Nexba, a small, newly-assembled lightweight yacht to undertake a 100nm return passage in the prevailing conditions? (All the predictive weather programs headlined an approaching low-pressure system with rain, building swells, and 25-knot winds.)

Why did none of the standard distress systems alert the maritime safety agencies that the crew was in peril? (The boat EPIRB was not activated, the compulsory Personal Locator Beacons apparently did not activate, and there was no ‘Mayday’ call on VHF.)

No doubt there could be solid answers to all these questions. Meanwhile, Tarnawski and Costanzo might reflect on their extraordinary luck.

They were lucky not to be trapped inside, or beneath, the upturned hull. They were lucky their families realized the yacht’s return was overdue and notified the authorities.

They were lucky that a passing freighter spotted them and broadcast their position. They were lucky a Royal Australian Navy destroyer, HMAS Brisbane, was in the area, heard the distress alert, and could conduct the rescue.

That’s a lifetime’s worth of good luck used up in 15 hours.