does this add up? 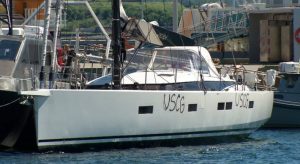 A sailing yacht has been towed to Dartmouth Cove in Nova Scotia after its German owners were killed last month in an accident at sea. Karl and Annemarie Frank lived on their CNB 66 yacht, Escape, and blogged about their sailing experiences.

Last month, the couple picked up two American passengers somewhere in the Caribbean. Around June 9, they left Bermuda and headed for Nova Scotia. On the morning of June 12, they ran into a bad storm off the coast of Massachusetts, said Lt.-Cmdr. Mason Wilcox of the U.S. Coast Guard.

“There was some sort of rigging failure that had caused an injury to the lady on board, and when the gentleman went by to go help her, he sustained injuries as well,” said Wilcox. Read on.