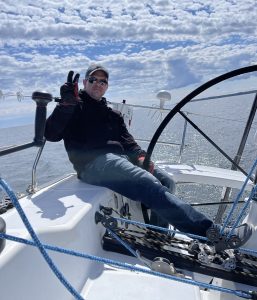 Getting acclimated to his new C&C 115 was no problem for Luke Brockman. On board for the first time, he sailed over from Lakeshore Yacht Harbor in Muskegon, Mich. to Chicago for the 26th Chicago Solo Mac Challenge Saturday morning, June 18, 2022.

For Brockman, it’s the tenth time he’s taken first in 14 completed Solo Challenges. The list includes three in Chicago, six on Lake Huron, three on Lake Erie, and one on Lake Ontario and Lake Superior. Many of the boats were within a few miles of each other for most of the race. A series of calculating moves propelled him from the pack.

“I learned a lot during the race,” said Brockman, a resident of Commerce Township in suburban Detroit who spends the weekends on his boat in Muskegon with his wife, Rochelle, and daughter Lucille. “I figured out how to sail it fast. I got the autopilot tuned up. There’s a lot of physical work to keep Her going. It’s a good performance cruiser that’s stable and comfortable with a lot of amenities inside.”

As usual, the turn at Grays Reef separated him from the challengers.

“Monday morning, I was approaching Grays [Reef],” he said. “A major storm came through for three hours. It was a huge system and looked scary. There was a ton of rain and lightning bolts and thunder coming right down on top of me. This went on for three hours. The storm was high enough that the winds were 25 from the south.

Shifting winds from Grays Reef can stifle and confound the best sailors.

“I was the first one in there,” said Brockman. “It was light air to the bridge, but I kept the boat pointed in the right direction and was able to through the Straits of Mackinac and pulled a couple miles on the train of boats behind me.

“I had the autopilot going on all night long. I did a good job of sleep management with eight 20-minute naps which gave me enough energy for the next day. “When I got under the Mackinac Bridge, the wind changed from the west to 20 knots out of the east with three-four-foot waves. The last five miles were difficult.

“Last year, I came out to meet him at 3 a.m.,” he said. “Luke is an awesome guy and sailor; it was really cool to see him win it. Being 24 seconds behind is not a bad thing. “He was within sight most of the race. His boat rates faster than mine. Luke really legged out up through Grays, and down The Straits. Being able to win with boat he just bought on is awesome.”

Crabb, who completed his third of five Mac’s, enjoyed the challenge.

“The wind picked up late on Sunday,” he said. “The storm came from Lake Superior. I was just entering the Manitou; most of the boats were at Point Betsie. There were gusts up to 40 miles per hour. That was easily the coldest race I’ve sailed.

“Going through the Straits, there were times I was spinning in circles. You have three totally distinct weather systems. Under the bridge, it was 6 knots out of west. Then, it was like a light switch going 20 knots out of the east with three-foot waves. The visibility on the lake was fine, but Mackinac Island was covered in fog. You couldn’t see when you crossed the finish line.”

Dirk Kruger, piloting a C&C 110, was second in the Superior Division with a corrected time of 1:23:19:24. The Bridgman, Mich. resident sails out of St. Joseph, Mich. It was his 13th Mac Challenge with 11 finishes.

Kruger and Crabb confessed to two nights operating on less than 20 minutes of sleep.

“I was physically battered,” said Kruger. “The boat heeled hard, I bounced around and fell a few times. I was a mile behind Luke at Grays Reef, but he made the turn and took off.”