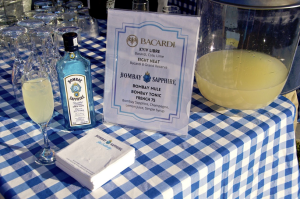 I was a guest at Noroton YC during the Viper 640 Women’s Atlantic Coast Championship last weekend.  This bar menu at the Bombay Sapphire cocktail party caught my Eye and reminded me of a story that I overheard at the Bacardi Cup in March.  Many of you know me as Eye Sailor, outspoken on some issues, silent on others. I am not a schill for Bacardi. This is just a shout-out for a company that in an age of corporate anonymity is still family-owned, has supported a legendary sailing event for 95 consecutive years and has never forgotten what it is like to be refugees.

You all know the story of the Bacardi Cup.  For those that need the abridged version:  Don Facundo Bacardí Massó founded the Bacardi distillery in Santiago, Cuba in 1862.  Don Facundo’s wife chose a bat for the company logo, because according to Cuban and Spanish lore, bats symbolize good health, good fortune and family unity. The founder’s son planted a palm tree at the opening of the distillery and launched the legend of El Coco “

The Bacardi company will survive in Cuba so long as the coconut palm, El Coco lives”.  In 1926, with prohibition in the United States, Cuba was a hot destination for American tourists and American sailors. The Star class held its midwinter championship in Havana and the Bacardi family sponsored the Trofeo de Bacardi.   The Star Class prospered, so did Bacardi, and their namesake trophy hosted every year in Havana in the Star class became one of the bucket list trophies to win in the sport of sailing.

The Bacardi family supported Cuba’s yearnings for freedom from the corrupt dictatorship of Baptista and so they (like many other patriotic Cubans) backed Fidel Castro in the revolution of 1957-1959.   Fidel rewarded them by confiscating all of Bacardi’s corporate assets and bank accounts in October 1960. Before the year ended,  El Coco, the 98-year-old palm tree withered and died. And the Bacardi family packed their bags and headed to Miami and Bermuda.

In 1962 the Stars and the Bacardi Cup found their new home in Miami along with many other Cubans.    Who can ever forget Tito Bacardi’s colorful awards ceremonies at the Bacardi Cup and his toast of “Cuba Libre” and his speech  “Bacardi’s dream is to take the Bacardi Cup back to Havana when Cuba is free. I don’t know when that will happen. Soon, I hope. We’ve been waiting for 43 years. That is my dream … Bacardi Cup in a free Cuba.”

Tito has passed but his spirit looms large.  I was at the Bacardi Cup tent this last March.  Eddie, a member of the Bacardi family and host each year to the Bacardi Invitational since Tito passed, was the warm host that he always is and I overheard this conversation.  Recall that Russia had attacked Ukraine only 10 days earlier.  Many American and European companies and governments were still trying to figure out what their stance or policy was going to be.  Forgive me for this artistic license because I don’t remember the precise words:

Sailors talking to each other:  “Man it sucks for Ukraine. “

Eddie :  “ No more Bacardi for the Russians”

Eddie “ Russia is our second-biggest market in the world after the USA. It is a very big part of our revenue…..or was”

Sailor “Was?”
Eddie “ Our board met immediately and we have suspended all exports to Russia”

Sailor “ Whooa . That is major. Why hasn’t there been a press release?”

Eddie “ We are a family company. We don’t have a stock price and we are not answerable to a PR department. We do what we think is right……..so no more Bacardi for the Russians, no more Grey Goose Vodka, no more Bombay Sapphire gin. I don’t know what Russian rum tastes like but I expect it is shit!”

Four days later, Bacardi duly announced that they had suspended sales to Russia and donated $1 million in aid to Ukraine.

Judging by the menu at the Bacardi bar on Saturday, the name for the drink formerly known as the “Cuba Libre”  appears to have stuck.     Kyiv Libre! And you gotta love the Cubans.

US Sailors Saved by Stuart Little? By Peter Huston