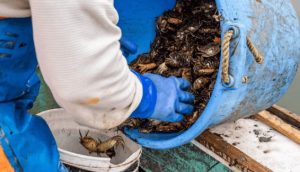 A distillery in New Hampshire has come up with a novel way to make a product out of a marine invasive species – the notorious green crab.

The green crab is a voracious predator of native shellfish, and it spreads rapidly by means of hull fouling and untreated ballast water. It is considered one of the world’s worst invasive species, and one of the hardest to control – especially since it has little commercial value as a fishery. It can be found on both coasts of the United States, and it is a major threat to shellfish populations, particularly soft-shelled clams.

Attempts to promote green crab as a food source have had limited success. However, Tamworth Distillery – a small batch maker in New Hampshire – has teamed up with the University of New Hampshire’s Green Crab Project to incorporate this unwanted crustacean into a boutique whiskey.  Read on.