in an uncomfortable trimaran 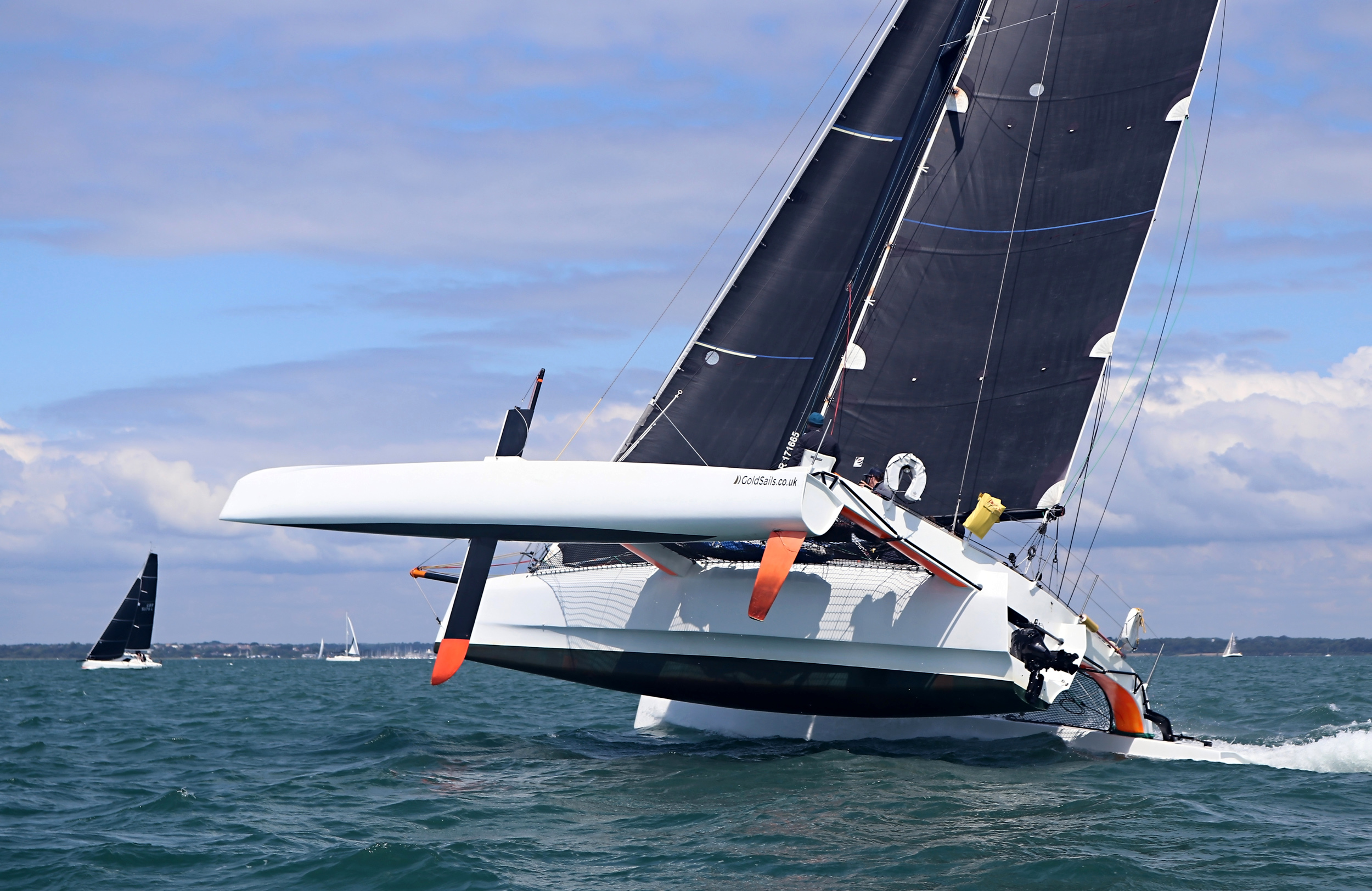 The Royal Western Yacht Club Round Britain and Ireland race started in 1966 and was reportedly described by Robin Knox Johnston who has won it twice as one of the hardest races in Northern Europe. The race takes place every 4 years and now has 3 48 hr stopovers. Galway in Ireland, Lerwick in Shetland and Blyth in North East England.

We entered Morpheus, a 39’ carbon trimaran designed by John and Orion Shuttleworth and launched in 2018. The boat was designed to compete in the Round Britain race but missed entry to the 2018 race by a whisker. We entered in the fully crewed (4-handed) category. Our main competitors were Hissy Fit the Dazcat 1495 50’ catamaran sailed faultlessly by Simon Baker and Dan Fellows and Pegasus the swing keel Open 50 sailed by Ross Hobson, Adrian Banks, and Chris Briggs. There were also a number of smaller multis and monos in this year’s race https://rwyc.org/the-round-britain-and-ireland-race-2022-rbi2022/

On this race, the whole of the British Isles was covered by an area of high pressure which made for challenging conditions. 90% of the race was upwind and pockmarked with wind holes for 3 out of the 4 legs.

We came off the start line in a brisk 20 knots tws which saw the boat fully powered up and peaking at 19 knots boat speed. After rounding the Eddstone lighthouse we bore away and raised the screecher reaching off in the high teens and early 20s along the SW British coast. In a premonition of what was to come we stretched out a comfortable lead on the following boats of about 30 miles until the wind switched off somewhere between the Lizard and the Scilly Isles. We watched appalled as the entire fleet caught us and joined the park up, waiting for the wind to reappear. Once the wind filled in again we were reaching through the Scillies on the first night and tacking towards the Fastnet Rock. Rounding the rock we continued to follow the southern shore of Ireland round before heading north to Galway – all the time waiting for a bear away which never happened….hard on the wind all the way to Galway!

We arrived in Galway just a few hours ahead of Simon and Dan on Hissy Fit with Pegasus joining us the next day. In Galway one of our crew had a family emergency and had to go home at short notice. We called veteran multihull sailor Chris Briggs and 4th leg crew for Pegasus and he dropped everything to join us for Legs 2 and 3. Thanks Chris!

We left Galway at 1400hrs  after our 48-hour stop and proceeded upwind for most of the 2nd leg (around 750 miles north, around St Kilda and over Muckle Flugga – the northernmost point of the UK)..once again, between Scotland and Shetland the wind crapped out for a day and up crept the forerunners in the fleet behind us (Hissy Fit, Pegasus and Orbit the Sunfast 33 sailed by Dominic Bowns and Ian Munslow). The race restarted -again- and not for the last time,  with Hissy Fit very close by. Upwind all the way to Muckle Flugga where we cross tacked 100m in front of Hissy Fit! Bearing away after Muckle Flugga made for some exciting reaching for all of an hour or so, followed by a downwind surf for the last 30 miles down to Lerwick in big following seas. That was the fun bit. We arrived just 2 hours in front of Hissy Fit.

We were the lucky ones. We saw a max wind speed of just 25 knots on leg 2 up to Lerwick. The following fleet were not so lucky. With the wind speed increasing dramatically, and still all upwind, 3 of the smaller multis suffered damage and gear failure and had to retire from the race. Belladonna Dazcat 10 sailed by Dominic Gooding and Brendan Seward had to retire due to Dominic suffering an injury and problems with the rig. Easy Tiger sailed by Neil Boughton and Julian Weyer Brown had steering problems and took shelter in Stornaway. Most notably Nemo (Newick 36 sailed by Matt Theobald and Enora Pichon) made it to Lerwick but suffered structural damage and retired in Lerwick to effect repairs for a gentle sail back South.

We left Lerwick in a gentle upwind breeze (naturally). The breeze built up to around 20 knots and we tacked all the way to Blyth in a nasty North Sea chop, arriving somewhat battered and bruised in Blyth around 36 hours later, followed less than 2 hours later by Hissy Fit who was closing on our lead! Pegasus and Orbit had joined us by the time we were prepping to leave 48 hours later.

This was The leg of Frustration. Leaving Blyth with (amazingly) the wind on the beam and a steady 18 knots of boat speed we were hoisting the J3 when the Screecher halyard let go, injuring Paddy Hutchings in the process. Paddy suffered a bad ankle sprain but told us to continue, adding that he could still helm and work the pit on one leg. After an hour or so the wind stopped again and left us drifting around going nowhere with Hissy Fit powering after us. The wind gently filled in again and we were off reaching across the Thames estuary – once again increasing our lead which had got down to 5 miles on the inexorable Hissy Fit. Only to get to Dover and another wind hole, just outside the busy ferry entrance. We kedged. When the tide turned we wound up some apparent and proceeded upwind at 4-6 knots until the next wind hole which coincided with the tide turn again and found us kedged in 100 feet of water next to a wind farm in the vicinity of Brighton. This time we watched Hissy Fit sail up to within a couple of miles of us and stop – as we had. Once the tide turned we glided away, again increasing our lead to a few miles before a further kedging session when the tide turned. Finally, the tide turned again and we slipped away in a light breeze (upwind) which just about stayed with us all the way to Start Point and up into Plymouth Sound where we ghosted to the finish under Spinnaker as the breeze clocked round 180 degrees to the South.

What a relief. Painful for us but worse for those behind.

Hissy Fit arrived a couple of hours later. The rest of the fleet got caught in more wind holes and turned up over the next few days!