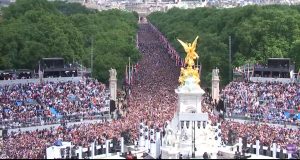 To call the British Royal Family “antiquated and irrelevant” shows just how out of touch the Sailing Anarchy is with the world these days. (See God Save the Queen)

Queen Elizabeth has been the Monarch of the United Kingdom for 70 years. Her Platinum Jubilee is being celebrated in over 50 countries, members of the Commonwealth who remain members in no small part because of the “antiquated and irrelevant” head of the British “Royal Family”.

The Sex Pistols on the other hand had an initial career of just two and a half years and are really only “relevant” to those the high side of retirement age trying to, in part, re-live their youth. They are hardly ‘The Rolling Stones’ or Pink Floyd now are they?

If the author of the piece thinks the “Royal Family” are “antiquated and irrelevant they should take a look at the attached still from the coverage of the ‘Trooping of the Colour’ the other day. Unlike claims of a recent American President, you really couldn’t see the ground for those wanting to see the “antiquated and irrelevant” matriarch of the “Royal Family” and the UK has a population of less than a quarter of the US.

Obviously doesn’t watch much of the Olympic Sailing where Team GBR has won twice as many Golds as Team USA has won total medals. In fact, in the last decade, the USA has won just one solitary Olympic Medal while GBR has racked up 13. – Alistair Skinner aka Shanghai Sailor.

Title thanks to these wankers…

the price is right

you guys made it, bro!