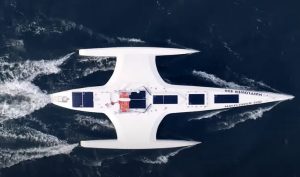 Props to Jalopnik for this one!

If you grew up in America, there’s a good chance you spent every November revisiting the gospel of the Mayflower. Now, a group of engineers tried to recreate the 1620 sea voyage to Plymouth, Massachusetts with an autonomous version of the Mayflower — which totally failed to hit its mark and ended up in Halifax, Nova Scotia instead, the AP reports.

Halifax, NS and Plymouth, MA are separated by about 440 miles, as the crow flies, which is, to be honest, pretty dang close to where it should have ended up, all things considered. After all, it’s not like the Mayflower’s pilgrims actually had a particular destination in mind — they just kind of… ended up where the boat stopped.