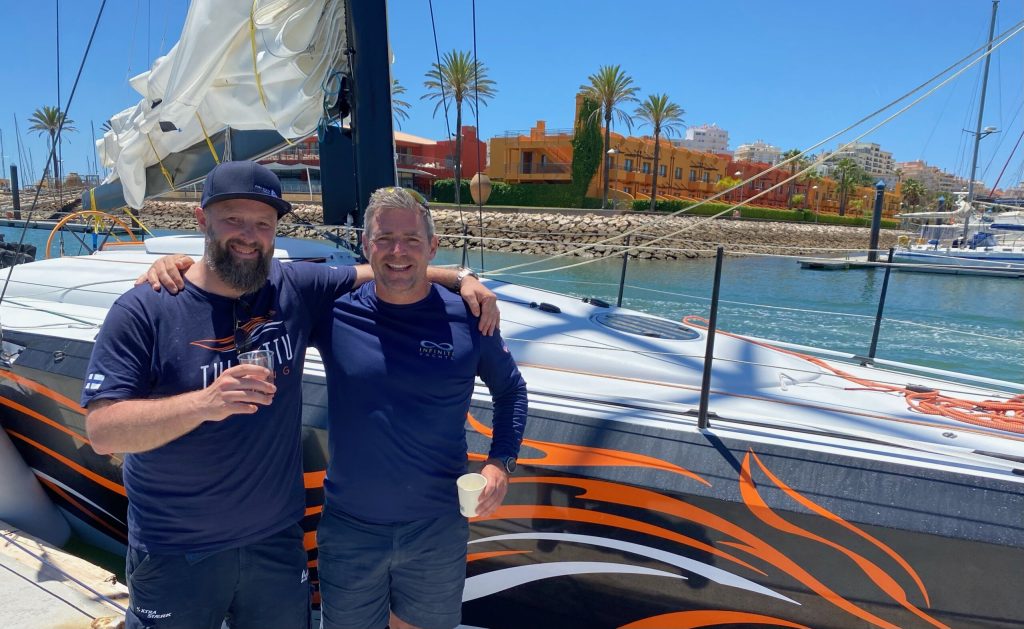 There is a fair bit of chatter about the abandonment of the brand new Infinity 52 Tulikettu. here is the end result of it all…

Tulikettu was sailing from Cascais, Portugal, back to the team base in Gosport, England across the Bay of Biscay. She was sailing with her foil fully retracted when the hull struck an unidentified floating object on Monday, April 18th. There was an uncontrolled leak in the boat, the cause of which was unknown. The crew triggered the EPIRB emergency transmitter on Wednesday, April 20, after midnight.

The four-person crew worked diligently to stop the inflow of water. Two of the crew were also experienced boatbuilders. After 10 hours, and within the arrival of the rescue ship they were able to make some temporary repairs to ensure the vessel would not sink. The team was approximately 300 nautical miles offshore, very likely beyond the range of helicopter rescue.

When the rescue ship was on approach, there was a lot of water in the boat. Not knowing whether the last repairs would work, the person in charge had two choices; to wait and see if the repairs worked, or to abandon the boat. The weather conditions were worsening, with high waves. The difficult decision was made to evacuate onto the oil tanker, ensuring the safety of the crew onboard as the logistics company had ordered the tanker to leave the area as soon as possible due to worsening sea state. No one was injured in the accident. The search for Tulikettu was stopped on Saturday, April 30.

Tulikettu was abandoned off the coast of Portugal. The boat was to take part in the world’s largest offshore sailing competitions. It was unknown whether the crews’ efforts worked. A new sighting of the boat was obtained on Monday, May 23rd. The boat was spotted by passing yacht and the crew reached out to the Tulikettu Social Media Channel via private message. When the tip proved to be reliable, the rescue operation was immediately restarted.

“It was an incredible feeling when we found the boat six and a half weeks after it disappeared,” said Arto Linnervuo, skipper and owner of Tulikettu Racing Team on Sunday in Portimão, Portugal. “Here I am, standing on the deck of the boat.”

After dozens of flight hours, countless drift calculations, and hundreds of nautical miles of searching by salvage boats, Tulikettu was found on Saturday, June 4, approximately 100 nautical miles west of Cape Saint Vincent, the southern tip between Lisbon and Gibraltar. The yacht was towed to the port of Portimão on Sunday, June 5th where she will undergo a thorough inspection and assessment of damage sustained. Read on.