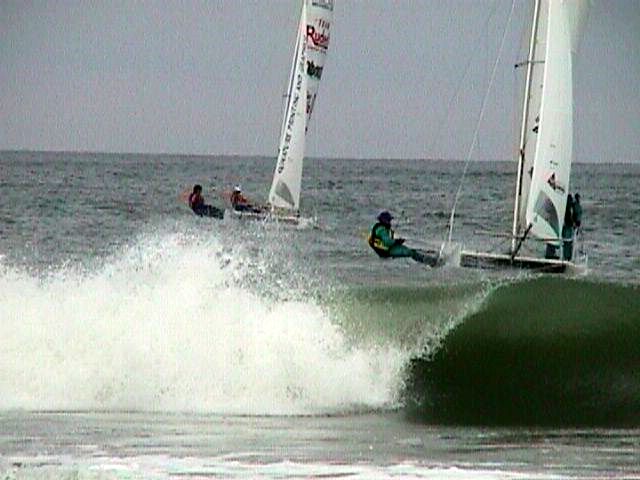 If there is one sailing event that always makes my heart skip a beat it’s the Worrell 1000. It has always been like that from the first time I heard about the race back when who knows when. A long time ago. I grew up sailing beach cats out of Durban, South Africa. Hobie 16’s to be exact, and I simply loved it. We were just day sailing and the thrill was at a high level.

When I heard that there was a beach cat race along the east coast of the US that went from beach to beach and involved good music and pretty women in bikinis, I was totally hooked. When I found out that it was a 1,000 mile race, well my mind was blown. A thousand miles on a beach cat and on a Hobie 16 nonetheless. What an idea and what an event it was; until it wasn’t.

I bring this up now because the Worrell 1000 is back and the most recent race finished this past weekend. There are a few things to note here. I knew Mike Worrell, well that may be a bit of a stretch, I met him a few times. He was a mild mannered man who, back in 1974, as a result of a bar bet, you know how those things go, sailed his Hobie 16 from Virginia Beach to Florida. There were only two entries; Mike and his brother. Mike and his crew Steve McGarrett were the only ones that finished. They pulled into Ft Lauderdale after 20 days. From that bar bet and very humble beginning the Worrell 1000 grew in strength until it started to attract some of the best sailors in the world.

One of them and one of the best by far was American Randy Smyth who came to dominate the race with six wins overall. He won in ’85 and ’89. There were no races for eight years after that, but on a winning streak from 1997 until 2000 Randy dominated, crushing the opposition. By the way in his spare time he managed to win two silver Olympic medals in the Tornado Class, the first in ’84 and the second in ’92.

I mention Randy not only because his name is synonymous with the Worrell 1000, but at age 67 he just finished this most recent race – in a very respectable third place overall. His third-place finish does not reflect his performance. He won seven of the 11 legs, and finished second in two and third on one. He tanked on Leg Two. He dropped his rig and by anyone’s measure that’s a bummer of a day. It set him back eight hours. How it works in the Worrell 1000 is that if you drop out they ‘award’ you the last finisher’s time; plus six hours.

That set him back eight hours otherwise he would have been the overall winner. What an incredible performance by one of the United States’ best sailors. No let me change that. One of the world’s best sailors. And let me just add something here. Randy’s age should not and is not a factor but let me state that the Worrell is a brutal sailing event. I have the utmost respect for any and all who show up on the start line and perhaps a little more respect for those who finish. It’s not a walk in the park.

Mike Worrel died in 2010 after an extended bout with pancreatic cancer but his vision lives on. His widow Mindy Worrell was at the finish. “It was his passion”, she said. “He would be so excited that 13 teams made it all the way and there were five international teams. I mean, I’m just over the top excited.” Mike would be too. When he spoke about the Worrell 1000 he spoke about it as if it was his baby; and it was. And babies should live on.

The Worrell 1000 is an event that needs to attract a major sponsor. It has everything. You have to launch and land off/on a beach and that usually ends up in a lot of thrills and spills and at times some complete clusterfucks, but that’s what separates the boys – and girls. Yes there have been some amazing all-female teams. The offshore sailing is amazing and that’s of interest to sailors, but the fact that it goes from beach to beach, and I mean some of the most beautiful beaches in the world.

That alone should bring in the big bucks. It’s an awesome event and I hope that it will inspire sailors for generations. Who doesn’t like sun, sailing, a little disaster every now and then, smoking hot girls in thong bikinis and a competition that attracts the best sailors? Since it’s the queen’s jubilee this week, and I am not a monarch but I am still borrowing a phrase. “Long live the Worrell 1000.” – Brian Hancock